Review of Gilligan's Better Call Saul Season 6A: Masterful, Suspenseful and the Unexpected with Outstanding Performances by Patrick Fabian and Rhea Seehorn

Every once in a while, something monumental springs into existence that unintentionally emphasizes the need for our society to do things in a less brisk and more leisurely manner. The Covid-19 Pandemic, for all the grief and sorrow it caused on a global scale, taught me that spending time with one’s family as a homebody can be more fulfilling and important than rushing from one stress-inducing place to the next in a cyclical and harried manner.

If you understandably would rather not learn this important lesson from a pandemic, look no further than the less deadly and more comforting world of television. Better Call Saul Season 6A is classic Vince Gilligan, a carefully constructed and gradual explosion into television mastery that emphasizes how a slow accumulation of details and plot can lead to a fulfilling denouement. Take things slow, in reality and in scriptwriting!

An Explosive Season Premiere
“Wine and Roses” and “Carrot and Stick” make for a particularly explosive two-episode season premiere. After that, Season 6A settles into a distinctly slow pace and tone that lasts from the brilliantly heartbreaking and almost poetic “Rock and Hard Place” until “Axe and Grind,” an episode that takes the meaning of the word slow to a whole new level.
And then, at the drop of a hat, everything coalesces in the single greatest episode of the series yet, “Plan and Execution.” Basically, that’s the classic Gilligan structure; an enthralling and action-packed season opener, middle episodes light on action and forward momentum, but heavy on character development and detail and an ending that is even more captivating and dramatic than the opening. It’s a great structure, one that if done correctly, is bound to impress.

But that’s the key word, “impress.” If one attempts to utilize the Gilligan structure with lackluster, one dimensional characters and without decent dialogue or good scene construction, this structure is really going to fail. This is not to say that having good characters and dialogue is not important for other types of scripts, but when making a structural choice to place strong emphasis on character development and the spinning together of minute details that lead to a fascinating conclusion, it is more essential than ever to have these elements properly featured.
Gilligan's Character Driven Story Succeeds
Better Call Saul has always succeeded with this structure because first and foremost, it has a long list of complex, three-dimensional characters, but it also has in its masterful scene construction, significantly layered details that will eventually lead to such exceptional grand payoffs. Simply put, great characters and little sprinklings of great plot details when woven together properly will lead to fantastic results. So with that in mind, let’s talk about the characters and the devil that’s in the details in Better Call Saul Season 6A.Bob Odenkirk is predictably brilliant, as he has evolved closer and closer to his true persona-the Saul who we all know and love from Breaking Bad days. But he cannot do it alone just yet. A few more things have to happen to make that final transition from Jimmy McGill to Saul through and through. 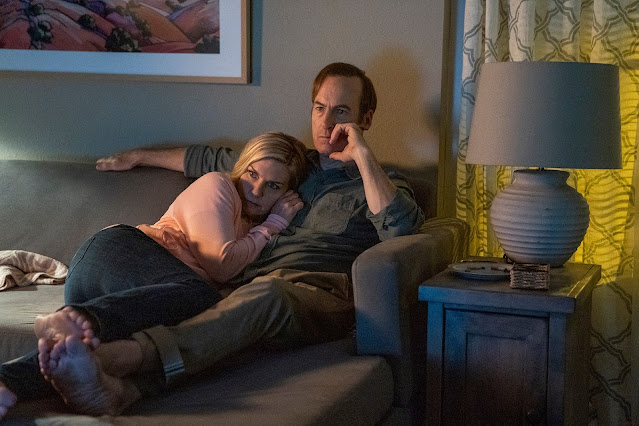 Rhea Seehorn and Patrick Fabian are Standouts
The real standouts of this season are Rhea Seehorn, as an unexpected mastermind of an accomplice and Patrick Fabian, the sacrificial lamb of sorts, the final prize of a game taken too far. Both Seehorn and Fabian take their performances to new levels of mastery. Seehorn has played Kim as an exceptional attorney who actually cares about her clients, leaving the audience pondering what about Jimmy draws her to him.
As the series has unfolded we witnessed inklings of her enjoyment participating in his scams, but we still didn’t know where it came from. The revelatory moment comes in 6A when we learn that scamming started in Kim’s childhood with her own mother. Kim not only knows how to carry out a scam expertly, she is drawn to the game and thus to Jimmy, despite having tried to escape it earlier in her life. She is so polished at the scam that she actually takes the lead in the planning and execution of a vengeful scheme against Howard Hamlin, and in so doing takes Jimmy closer to Saul than ever.
Odenkirk and Seehorn are a perfect match, strongly picking up on each other’s cues, rhythm and style as they plot and plan the destruction of Howard’s sterling reputation in the legal community. One of the best aspects of this storyline, from episode to episode, was the gradual unfolding of each specific detail of the plan that would lead to Howard’s eventual ruination. As Howard’s life is further and further dismantled by each “play”, Kim and Jimmy become more and more emboldened, failing to anticipate that their game could have devastating   consequences that even they might regret, including the inescapable erosion of their own characters. 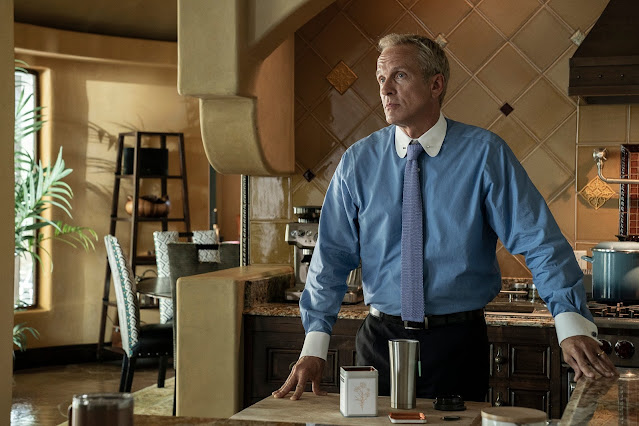 Patrick Fabian Perfectly Plays the Polished PerfectionistPatrick Fabian has always made the most of his charm, style and good looks playing the polished, arrogant perfectionist, Howard Hamlin, who is a successful and well-respected partner at the law firm founded by Jimmy McGill’s deceased older brother, Chuck (Michael McKean). Throughout the series, Howard is also Jimmy’s arch nemesis, a foil of sorts for Jimmy’s inadequacies and failures, as he brazenly casts Jimmy aside and takes the profits and accolades all for himself.
In Season 6A, played expertly by Fabian, a different kind of Howard emerges. As he realizes that he is being set up by Jimmy and Kim, he becomes frenzied, furious and desperate, trying to outdo and undo the scams that are besieging his life. Driven to absolute despair and in a state of complete fury, he begins to spiral downward to the level of Jimmy and Kim in an attempt to win the game.
ICYMI: You May Like This Interview with Patrick Fabian
https://www.suzeebehindthescenes.com/2018/03/interview-driverx-movies-patrick-fabian.html
But he does not realize who he is really playing with. The final episode of Season 6A, “Plan and Execution”, takes the audience into that downward spiral, ending with a shocking, stunning conclusion. Fabian’s performance in this final episode is award-worthy. Howard was not a likeable sort of character, but suddenly, I found myself feeling very sorry for him and for the ending that no one, including Jimmy and Kim, probably expected. Only a superb performance like Fabian’s in that episode can engender that sudden change in attitude towards a character. That and a genuinely fantastic script.
ICMYI You May Like Ashton's Review of Ozark HERE.
Or Ashton's Review of The Sopranos HERE.
Awaiting the Conclusion
Season 6B will be released on July 11 and will conclude the series altogether. Rest assured in the Gilligan style, we will be greeted with plot twists and turns. It would seem that the fate of Kim may also hang in the balance. Best of all, some gems await us, such as the appearance of a new guy named Jessie, and another guy… someone named Walter White.
Email ThisBlogThis!Share to TwitterShare to FacebookShare to Pinterest
Newer Post Older Post Home