For World Day Against Trafficking on July 30th, View Free Screening of the Feature Film Angie: Lost Girls, A Film which Chronicles the Horrors of A Teenager who was Trafficked 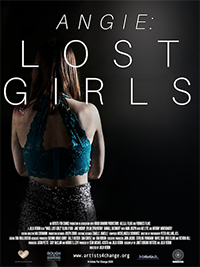 When people leave this world, it is said that they will be missed. The world lost Candy Straight, and I know specifically the people and the projects this loss will affect. I also have a sense of the people she helped, especially females and young girls that were touched and inspired by her wisdom and strength. I am one of them.
I was privileged to have known Candy for the past ten years. We met at an educational seminar at a local college, where she was a speaker. I introduced myself afterwards and it grew from there. We had a lot of interests in common, Rutgers (she was on the Board of Governors), film, politics, women's issues and interestingly the world of the soap opera. In fact, we were both working on online soaps at that time.
PLEASE CLICK HERE to see more of this article.