Review of The Award-Winning The Marvelous Mrs. Maisel on Amazon Prime - Clever, Colorful and a Fascinating Look into the Beginning of the Modern Career Woman 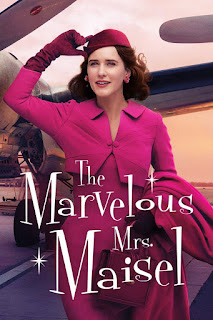 As the pandemic continues into the summer and television continues to be an important part of my life, I can confidently say that The Marvelous Mrs. Maisel is one of the highest-quality shows that I have seen in the dramedy genre. Created by Amy Sherman-Palladino, the show is three seasons in, with its fourth season release date set for December 2020 (though the pandemic may affect this date).


The Marvelous Mrs. Maisel takes place in 1958 in New York City. The main character is Midge (superbly acted by Rachel Brosnahan), a Jewish woman in her late twenties. She lives on the Upper West Side in a beautiful apartment with her husband Joel (Michael Zegan) and their two young children. The series starts with the couple living a content, typical life, where Joel fulfills his husbandly duties by going to work at his office job during the day, then comes home to his loving wife Midge who has just prepared a hot dinner waiting on the table.

However, Midge’s life soon takes a dramatic turn, and she finds herself pursuing a profession that she never thought she would—comedy.

As shown in the pilot episode, Midge has a great sense of humor. I mean, she even did the toast at her own wedding, where she told the room full of her Jewish relatives that there was shrimp in the egg rolls (which resulted in some minor chaos.) But her husband was always the one who dreamed of becoming a comedian.

So, when she accidentally discovered her talent on the stage, she was a bit hesitant about turning it into a serious career. In the 1950's, women comics were scarce - wife, mother, and secretary were the norm. However, as the show progresses, we soon find that Midge is not the average housewife - she is opinionated, passionate, and loves being the center of attention. 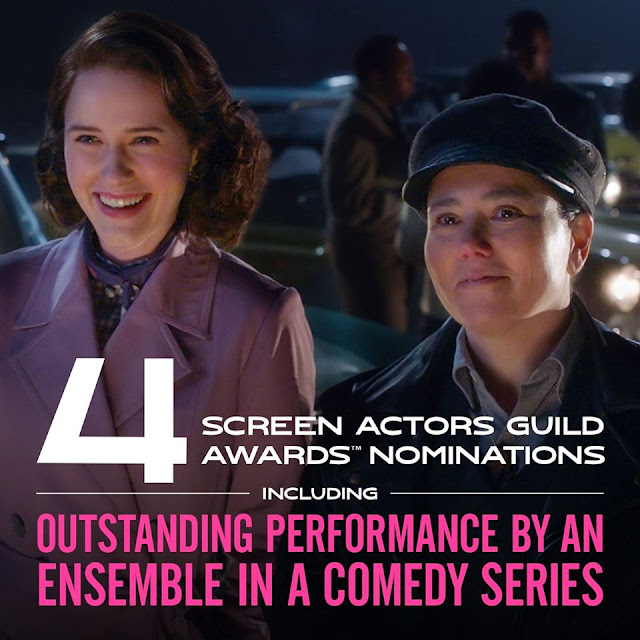 The characters in this show are absolutely perfect. Midge is kind of a paradox; an interesting blend of sophisticated, down-to-earth, and spoiled all at the same time. Unlike many shows that attempt to create strong women characters with extreme - quirky and “not like other girls,” overly-sexualized and mysterious, or tough tomboys who don't take crap from anyone - Midge doesn’t fall into one category.


You May Like An Interview with Amy Sherman Palladino's Mother:
https://www.suzeebehindthescenes.com/2020/02/meet-marvelous-miss-maybin-hewes.html
or
The Costumes of The Marvelous Mrs. Maisel:

https://www.suzeebehindthescenes.com/2019/08/beth-in-big-city-first-in-line-to-see.html
All the other characters are spot on as well. The show falls into the close-knit, rather overbearing family stereotype because Midge’s parents, along with her in-laws, are the epitome of judgmental, over-involved parents who care way too much about their children’s choices and the people they date. However, no matter how much they can drive her crazy, her parents are still two of the most important people in her life. 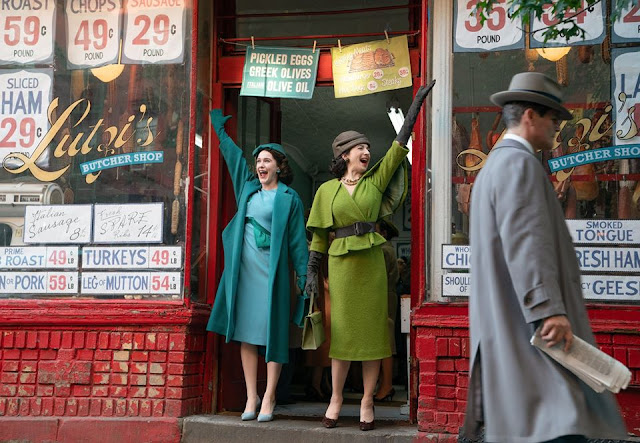 As for Midge’s husband Joel, it’s hard to decide whether you love him or hate him. He is such a well-developed character because, regardless of the mistakes he makes, you still can’t help but like him as he continually cares for Midge and repeatedly tries to redeem himself.

Another fabulous character is Susie, Midge’s agent (played meticulously by Alex Borstein). She’s hard-headed and doesn’t let anyone push her around. This is critical for Midge’s comedy career because most venue owners see Midge as a naive housewife that they can rip off and underpay, so she needs someone like Susie to look after her professionally. She is brutally honest with Midge and shows her affection through “tough love.” She acts as a really good balance to Midge and they both make each other better people through their endeavors together.
_______________________________________________________________________________
More from Julia - She reviews Never Have I Ever:
https://www.suzeebehindthescenes.com/2020/06/what-were-viewing-review-of-mindy.html

Some of my favorite scenes from the series are when Midge is on stage, because the way she surprises her audiences with her performance is almost as entertaining as the acts themselves. During the fifties, there were certain topics that people weren’t supposed to talk about, especially as a woman. At one of the venues, Midge starts talking about pregnancy and how Eve screwed over womankind for eternity by eating the apple. Despite the fact that Midge is saying this in good fun, and the audience is finding her hilarious, she is pulled off stage in the middle of her set and scolded by the owner who claims that people don’t want to hear a woman talk about pregnancy because it makes them uncomfortable. 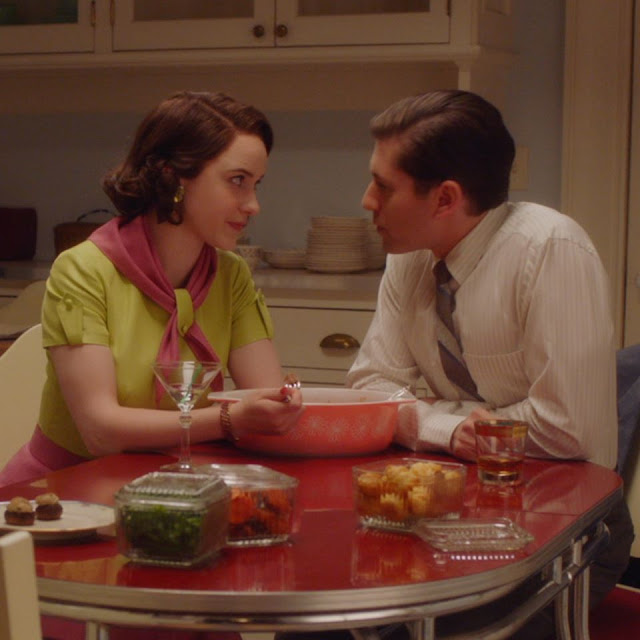 But, because she is THE Midge Maisel, she ignores these types of ignorant people who want to tell her what she can and can’t do because of her gender, so she continues to cuss, talk about what she wants, and make people laugh because that is what she loves to do.
So, if you’re looking for a dramedy with great characters and lots of laughs, I highly recommend giving The Marvelous Mrs. Maisel a try.