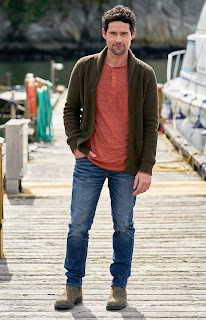 By Markos Papadatos
Senior Writer and Powerjournalist
The talented Canadian actor Benjamin Hollingsworth is starring in the upcoming movie "A Splash of Love," which premieres on the Hallmark Channel on July 30. He is also known for his roles on "Code Black" and "Virgin River." For Hollingsworth, it was a "fun experience to do "A Splash of Love" due to his love for orca whales. He also revealed that the latest fourth season of "Virgin River" premiered on July 20 on Netflix.

Hollingsworth listed "Ozark," "Arrested Development" and "Severance" as three of his favorite series to binge-watch.

"I've always been a big 'Ozark' fan, and I love ending the night with 'Arrested Development' too. I've watched the entire series four times now," he said. "Ben Stiller, who directed 'Severance,' is a very talented director, and all of the actors are phenomenal in that one. 'Joe Pickett' is on Paramount+ and it is an incredible show."

Hollingsworth revealed that some of his favorite movies include the classic "Butch Cassidy and the Sundance Kid," "12 Monkeys," as well as "A Few Good Men." "I did the stage version of 'A Few Good Men' when I got out of theater school," he said. "There are so many great movies," he admitted.

"I'm a huge Brad Pitt fan, and I love all of the Quentin Tarantino movies," he said. "Aaron Sorkin is one of my favorite writers."

"The new 'Top Gun: Maverick' film reminded me of how much I loved the first one," he said. "Tom Cruise has still got it."

To unwind and relax, he enjoys running in nature and playing hockey. "I love connecting with nature and being around it. It's a big de-stressor for me," he said. "It makes life simple, takes you out of the external stresses of the world, and it brings you back to your core."

His favorite cheat meal is ice cream. "I've been known to finish a tub of Häagen-Dazs in no time," he said.

Motto He Lives By

He revealed that his favorite mottos to live by are "enjoy the journey." "That is really important," he said. "Life is stressful and it feels like it's always a battle. Take time to be thankful for the present moment."

Hollingsworth shared that the word success for him is "all about perspective."

A preview of "A Splash of Love" may be seen below.