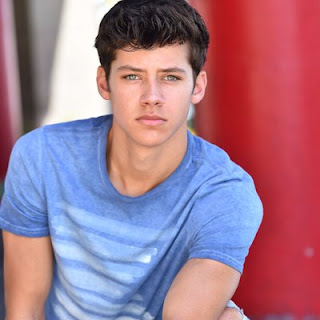 His Inspiration, Dream Acting Partners and Shows to Binge

Every day, he is inspired by his family and his faith.

Aside from his very own "High School Musical: The Musical: The Series," his favorite series to binge-watch is "Friends." "That is such a fun show, there is so much to watch, so it's a commitment to watch it," he said. "You have 10 full seasons to watch, so get ready, and buckle up. 'Friends' is so great."

To relax and unwind, he enjoys sitting on the couch and literally doing nothing for a whole day, as well as "driving around to clear his head." "I love cruising while I jam some music," he said.

He revealed that his favorite cheat meal is "a good greasy pizza" or a "good cheeseburger."

His Motto - Shoot for the Stars!

His favorite mottos to live by include "be true to yourself" and "stick to who you are and be true to who you are." "I've been very lucky to be raised by two amazing parents and I have an amazing family," he said. "My family definitely keeps me humble and they make sure I stay true to who I am."

"I tell everyone to keep on dreaming big, even though I am living my dream," he said. "Don't set your dreams and your goals small. Set them so large that even if you shoot for the moon and you miss, you are still among the stars. I think that is so amazing," he explained.

For Cornett, the word success means having a loving family, good friends, as well as being content and healthy in life.