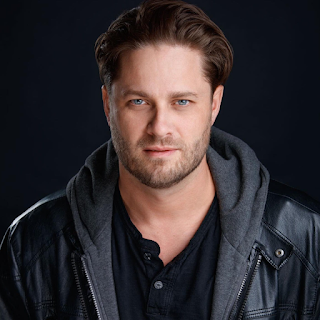 Matt Hamilton is a fixture in romance and Christmas movies. And now he's starring in  the upcoming new original Hallmark film Campfire Christmas, which comes out on Saturday, July 16. It is a part of the network's annual "Christmas in July" programming.

Matt states, "It's an ensemble piece and it's fun," he admitted. "I think it's really funny, it's one of the funnier films I have been in."

He went on to praise his five co-stars Tori Anderson, Corbin Bleu, Jeffrey Bowyer-Chapman, Caitlin Stryker, and Alec Santos for all being fantastic.
Hamilton was a 2019 Leo Ward winner for "Best Male Performance" in The Actress Diaries,” a 2018 "Best Male Performance" nominee at the International Academy of Web Television, as well as a 2015 Leo Award Best Actor nominee for The Actress Diaries. His IMDB profile lists over 50 credits including roles in many well-known movies and TV series, such as Turner and Hooch.
He graduated from Vancouver Film School for writing for film and television, and he earned his B.F.A. in writing from the University of Victoria. Born and raised in Victoria, BC, Hamilton resides in Vancouver.
For hopefuls that wish to go into the entertainment industry, he encouraged them to "get comfortable with being rejected" and to not take things personally, especially if one gets declined for a role for reasons one can't control.
Hamilton's Favorite Movies and Shows
He listed Die Hard, starring Bruce Willis, as his personal favorite movie. "I've seen it the most and I never get tired of it," he said. This year, he enjoyed Top Gun: Maverick as well as the new Batman film The Batman starring Robert Pattinson.
His favorite series to binge-watch are Seinfeld and Stranger Things. "Right now, I am also watching The Boys, it is so fun and so messed up," he said.
To relax and destress, he enjoys reading, playing softball, sitting on his patio, going to a lake, and hanging out with family.
His favorite cheat meal is McDonald's. "I love having McDonald's once every month or every two months," he said. "I love a Big Mac and I look forward to it."