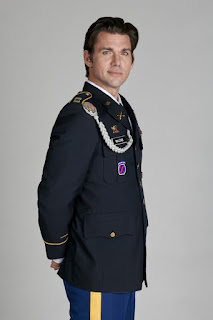 By Markos Papadatos
Senior Writer and "Powerjournalist"
Photo Left Credit: Albert Camicioli, Crown Media
Acclaimed McGarry is known for starring as Nathan Grant in Hallmark Channel’s hit primetime original series, When Calls the Heart and in CBC’s Heartland as Mitch Cutty.  You may have also seen him in many other popular TV shows.
Most recently, McGarry starred in the original Hallmark Channel films The Wedding Veil and Feeling Butterflies. He has previously starred in the network’s Christmas Scavenger Hunt, Love on the Books, Winter Castle, and Love at First Bark.
In the Hallmark Movies & Mysteries department, McGarry was in originals Signed, Sealed, Delivered: From Paris with Love and A Song for Christmas. On the big screen, he appeared in Saw 7.
I asked him about entering the business. For young and aspiring actors, he encouraged them to "work hard and get some training." "I came from a theater background, and that type of training is invaluable and it helps you understand the stories," he said. " There has never been a better time to get into acting. Get in front of every camera and every audience that you can."
He acknowledged that he is a fan of comedies, and he listed Pulp Fiction as one of his favorite movies ever. "Recently, I thought the new Elvis movie was great," he said.
McGarry enjoys binge-watching The Boys on Amazon Prime Video. "We just finished Succession, which is in its fourth season. I also love the Marvel movies, I think they are great," he said.
You May Like: Review of The Boys on SuzeeBehindtheScenes HERE.
On the greatest lesson that the acting profession has ever taught him, McGarry responded, "to be kind and to have humility." "I have met great people in this industry and the ones that have had the most success are the kindest."
In an effort to destress and relax, he enjoys traveling, as well as working. "I prefer to be working, I think. I don't sit still very well for too long," he said. "Relaxing comes and goes pretty quickly. I enjoy having dinner with friends, and then I enjoy working again."
He shared that he enjoys "living in the moment." He revealed that he is mostly a pescatarian, but every once in a while he cheats with "fried chicken." "We eat a lot of sushi and salmon," he said. "We eat pretty healthy."
McGarry stars in the new Hallmark film My Grown-Up Christmas List (opposite Kayla Wallace) which will premiere on Saturday, July 9th on the Hallmark Channel, as part of their "Christmas in July" programming.