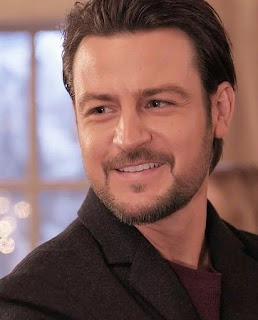 You may recognize the prolific and talented actor Tyler Hynes from the slew of Hallmark movies that he has done, for which he has gained quite a fandom. He is known for his work in such Hallmark films as "Falling For You," "It's Christmas, Eve," "Flip That Romance," "The Mistletoe Secret," "Winter in Vail," "It Was Always You," "Sweet Carolina," "Roadhouse Romance," "An Unexpected Christmas," and "Always Amore," among others. But, this Canadian actor has also been in multiple TV series including "Letter Kenny", "Star Trek Discovery" and "UnReal." And he's talented behind the camera as well, writing and directing his own content.

He revealed that his favorite movie is "Phantom Thread." "I actually watched 'Phantom Thread' while I was at RomaDrama in West Palm Beach, Florida. It is one of two movies that soothes me and it really makes me feel good artistically," he said. "It's an incredible film by Paul Thomas Anderson. The two actresses, Lesley Manville and Vicky Krieps, are unbelievable in this movie too."

"Also, I would love to someday do a Hallmark film with Harriet Sansom Harris, who was in 'Phantom Thread' and she was also in 'Licorice Pizza.' It would be my dream to do something with her," he said.

Get To Know Tyler Hines

He shared that he is binging the series "The Staircase."

In an effort to unwind and relax, he noted that he stretches and rolls around on the ground with his dog, and he goes for a motorcycle ride. "If I am lucky, I will get on my skateboard. I haven't done that in a while," he admitted. "Silence is how I rest."

He revealed that his favorite cheat meal is "doughnuts." "Doughnuts all day," he admitted.

If he were to have any superpower, he revealed that it would be "the power to maintain and give perspective."

He also took some time to answer a few “Rapid Fire” questions.

Flying or driving? Both equally (I like them both in silence)

Singing or dancing? Neither

Burgers or tacos? Both simultaneously

Money or fame? Neither

You May Like: The LIBBY Show-Lunch with the Ladies
The Ladies Choose their Top Twelve Christmas Movies
Watch HERE on Youtube

Visit Our Talk show The LIBBY Show: Lunch with the Ladies