Equity The Film at Tribeca Film Festival 2016: Photos from the Red Carpet and More

Equity The Film screened twice at the 2016 Tribeca Film Festival. Cast and producers stepped out on the Red Carpet to celebrate this female-driven Wall Street movie that will be in theaters July 29th. 2016. Anna Gunn plays an ambitious investment banker with Alysia Reiner watching her every move as a prosecutor and Sarah Megan Thomas as her assistant in this highly-anticipated tech thriller.


For more info on the movie visit: https://www.facebook.com/equitythefilm/

The Red Carpet was abuzz with excitement as Equity, billed as the first female-driven film about Wall Street, had two screenings at the 2016 Tribeca Film Festival in New York City. Equity is the story of Naomi Bishop, a female investment banker played by Anna Gunn (Breaking Bad, Chunk and Bean), who takes a privacy company, called Cache, public. In this tech-thriller the ambitions of these highly-competitive Wall Street bankers collide to create a complex story full of unexpected twists and turns emulating the real dealings of a world in which power and money supersede all. Unique to this movie, the main movers in this movie are the women. It was also directed by a woman, Nora Ephron Prize Winner Meera Menon.

North Jersey will be chock full of notables in the next few months. From reality to news to the moon, Bookends in Ridgewood is the place to be to see some of your favorite celebrities.. and an astronaut.

For the price of a book, this venue offers a way to see these celebrities, hear from them, say a few words to them and then get a photo with them (in most cases).

Coming in April are RHONJ Chris Manzo, business owner and now children's book author. He'll sign copies of his illustrated children's book Oliver Brightside on 4/22/16. Expect that mom and family may be there to support him. I have been to this store for many #RHONJ events and many of the the families and friends you see on the show are always there because they truly are their families and friends. 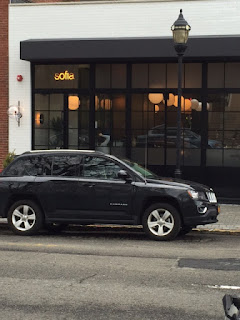 Sofia's is an upscale restaurant in Englewood, NJ, a few minutes from the GW Bridge.

According to the website, Sofia emphasizes its dry-aged steaks cooked to perfection, its wide array of beverages including a great wine list, expert-crafted cocktails and loca beer. It also has a downstairs smokers bar with a filtration system.

I visited this restaurant to review it with my millenial son as a second opinion. Overall, we will both go back to try more of what's on the menu as we were very impressed with the selections we chose. Here's why: