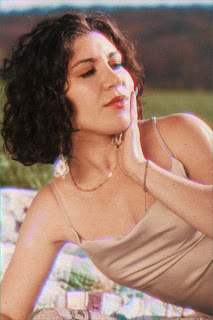 Artist Libby Jade announces the release of her third single, "Pausing Clocks" which recently debuted on most streaming services. "Pausing Clocks" is her third release and is an acoustic indie pop song about making peace with the present. The song will have an official lyric video and acoustic video waterfall releasing each week after the initial track release date. You can find the music here on Spotify and Apple.
Libby Jade's other songs are "Geometry" and "Homebody" Rounding out the band with her are Shane Curry, Chris Popp and Gregory Thomas Pease. Libby Jade has currently been performing in NJ, Brooklyn and New York City (Sofar Sounds).
Summer Dates Announced: July 22nd Sofar Concert in Brooklyn. See Sofar website or contact Libby.wav on Instagram. August 6th - House of Independence, Asbury Park, NJ.
Both Libby Jade (also known as Libby Kallins) and Shane Curry have a song from their other band, ZOOCHIE featured in the new movie We Need to Talk, a comedy about a gaming influencer played by James Maslow (Big Time Rush.)  The song is called "Talk". For more on the movie visit We Need to Talk.
Born and raised in New Jersey, Libby Jade is a singer/songwriter seeking to give fans their daily dose of nostalgia and capture warm melancholic moments through her music. Libby states, "I've always had a difficult time with change, big or small, which is why I am obsessed with the concept of living as in the moment as possible. Each verse in this song refers to specific times in my life that were beautiful, special, and magical to me, that then suddenly came to a close."
Libby cites an example. She adds, "For instance, I adopted and 11 year old French Bulldog, Bella who died in a fast 9 months after I adopted her. Because of this, for each pre-save, a dollar will be donated back to Bella’s rescue, Bullies 2 The Rescue. "Pausing Clocks" is a reminder that good feelings return as life continues on. Good times will continue to be experienced and that fuzzy warm feeling always comes back if you look for it.
To connect with Libby Jade: https://www.instagram.com/libby.wav/ and https://www.tiktok.com/@libby.wav
# # #
Email ThisBlogThis!Share to TwitterShare to FacebookShare to Pinterest
Newer Post Older Post Home