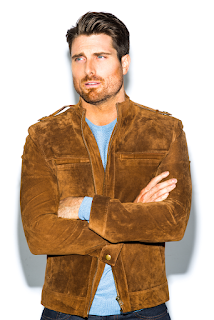 By Markos Papadatos
Senior Writer and "PowerJournalist"
Canadian Actor Marcus Rosner is known for starring in such Hallmark films as "Romance to the Rescue," "Love Stories in the Sunflower Valley," "A Vineyard Romance," and "Love on Harbor Island," among many others. He also appeared in the Lifetime movie "Killer in the Guest House" and he starred in "My Fake Boyfriend" on Amazon Prime.
In "My Fake Boyfriend," Rosner acknowledged that his character was over-the-top crazy. He had a great deal of fun playing Nico and enjoyed the challenge that it presented him.
Speaking of "Romance to the Rescue," Marcus loved the experience in this latest Hallmark film since he enjoyed working with his acting partner Andrea Brooks (ironically enough, they both like watching "Jersey Shore"), and being in the presence of Border Collies, which he describes as extremely smart dogs.
Rosner has also appeared on "Continuum" on SYFY, as well as on "Arrow" on The CW, and "Supernatural," as well as on "When Calls The Heart" on the Hallmark Channel, and the dark dramatic comedy series "Unreal."
Superpower of Choice
If he were to have any superpower, Rosner revealed that it would be "teleportation." "That would be perfect for me because teleporting would allow me to be in many different places in one day," he said.
Favorite Flicks
He listed "Goodfellas," "The Shawshank Redemption," and "Good Will Hunting" as three of his personal favorite movies of all time. "I think a lot of people love the movie 'Goodfellas,' it is just incredible and perfect to me," he said.
Favorites to Binge
His favorite series to binge-watch was "Severance," which was co-directed by Ben Stiller. "I thought 'Severance' was one of the best shows that I have seen in recent years," he said.
How He Unwinds
In an effort to relax and unwind, he shared that he goes to the gym. "The gym sort of resets everything for me, for an hour with music in my ears," he said.
Pizza and Ice Cream
Rosner's favorite cheat meals include pizza, "Pizza is the ultimate food, in my opinion. Dough, meat, and cheese are incredible," he said. "I love Dairy Queen Blizzards or McDonald's McFlurries."
And More about Marcus
His alternate career choices would be a scuba diving teacher or a talent agent in the sports world.
Aside from acting in films, he has also stepped into the role of "producer" over the last few years.
His favorite motto to live by is "seize the day."
For Rosner, success means being able to support one's physical necessities in life with one's artistic passion.
You can check out a preview of Marcus Rosner in
"Romance to the Rescue" on Hallmark:
https://www.youtube.com/watch?v=jqP1g25NuEI&ab_channel=HallmarkChannel
Email ThisBlogThis!Share to TwitterShare to FacebookShare to Pinterest
Newer Post Older Post Home