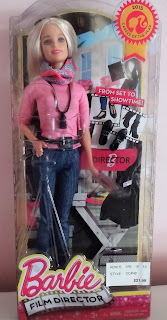 Slated, (https://welcome.slated.com/) a major online site which finances film and other projects, did  quite a comprehensive  survey of female-based or created films. The study tracked just about every theatrical release 2010-2015, In this article in the Hollywood Reporter, the study found that movies directed, starring, or produced by women had a higher return on investment, especially above the 25 million dollar mark. However, they are typically given lower-budget films and doubly handicapped by being given almost 2/3 less screen time. Details here:

http://www.hollywoodreporter.com/news/study-films-directed-by-women-907229
No comments:
Email ThisBlogThis!Share to TwitterShare to FacebookShare to Pinterest

The Captain Fantastic Movie Challenge: Get Out and Do Something: View New Featurette Here