Film Review: Joel Cohen's The Tragedy of MacBeth is a Minimalist Masterpiece add to that Kathyn Hunter's Genius Performance as Three Witches and you Have Something Shakespeare Himself Would Beam About 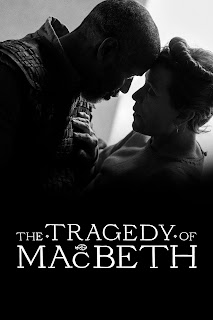 Another adaptation of Macbeth? Why do we need it? This may be the principal perspective of the majority as they, with some hesitance, head into theaters to watch Joel Coen’s first film without his brother, an adaptation of The Tragedy of Macbeth. However, I assure you that Cohen’s idea to adapt this again is valid, because the unique filmmaking sensibilities that he brings to the table ensure that this is a Shakespearan adaptation unlike any other.

There are three specific aspects to the film that are particularly innovative. The decision to utilize minimalism and pare down everything in the film to its bare essentials highlights the performances, especially the soliloquies given by the always powerful Denzel Washington and Frances McDormand.

This Shakespearean adaptation is shorter than most and that is certainly an aspect of the minimalistic qualities that Cohen brings to his movie. At 105 minutes, it is exceptionally concise; many of the indispensable lines are still featured and yet Cohen seems to subtract a decent amount of the original text without creating any significant damage. The succinct nature of the film as evidenced by its runtime is representative in general of the minimalist qualities of this adaptation.
Visit our New Companion Entertainment & Lifestyle Talk Show
The LIBBY Show: Lunch with the Ladies
https://www.youtube.com/channel/UCgVU40peyhgLAYQ00x9UjMQ
Specific minimalist elements of film utilized for the movie will be considered, but first, it is most important to note the positive effect that this filmmaking technique has on the work as a whole. Because everything is minimalist, the sets barren and everything visually desolate and unappealing, our focus shifts away from what is happening in the background to… you guessed it, the actors!
Many films have stunning sets that are appealing to the eye and this is important for certain stories, but for something like Macbeth, which features some of Shakespeare’s most iconic and alluring soliloquies, the emphasis should only be on the actors delivering those lines. Washington and McDormand are as brilliant as ever in their roles, but we get to witness their magic with a greater sense of focus and appreciation because our eyes aren’t drawn to anything else. The audience is fully committed, staring at the two veteran actors hypnotically, entranced by their every move.
I would be remiss if I didn’t analyze some of the techniques eluded to above and how the inclusion of such elements both contributes to minimalist filmmaking and creates a distinct supernatural world. The film is in black and white, shot in academy ratio, 1:37, a square, isolating aspect ratio and filmed on a series of sound studios with imposing vertical walls, devoid of any warmth or exuberance. The small, lifeless sound studio strips us of anything visually appealing to look at, forcing our eyes to stay on the actors.
The camera allows us to look at less than we are used to in mainstream films as the square aspect ratio doesn’t allow for it. As for the supernatural, between the black and white and the purposefully bland, almost noticeably artificial sound stages, the visuals in the film seem to perfectly symbolize the world of Macbeth, one that is removed from reality or anything remotely resembling our world.
View Trailer Here:
Link: https://www.youtube.com/watch?v=HM3hsVrBMA4
Shakespeare’s elaborate supernatural world and his profound dialogue are given the best treatment yet, thanks largely to Kathryn Hunter, an American-born British actress and theater director. Her interpretation of the three witches (she plays all three) is idiosyncratic and her performance, unlike any other committed to celluloid, is one of the most wonderfully unsettling and masterful depictions of the three witches due to both the physicality of the performance and the vocal pitching of the different sisters.
In the role, she twists and contorts her body with exceptional agility; so many of the positions she managed to create are seemingly impossible to enact, yet with her level of training (she trained at England’s Royal Academy of Dramatic Arts) she performs them with ease. As for Hunter’s vocal pitching, there is something endlessly mesmerizing and satisfying about listening to her guttural, raspy voice. The decision to treat the three witches as one entity leaves room for ambiguity as to what or who this being is, but what it also does is allow Hunter to change her voice ever so slightly for each witch. She is essentially talking to herself, yet in three different voices.
The performance is certainly something new that contributes to a more primal and generally eerie supernatural recreation of Shakespeare’s world, one that I am certain he would be ecstatic about if he was around to witness the genius that is Kathryn Hunter.
Everytime thoughts of this film enter my head, I become joyous, for a variety of  reasons. For one, to witness such technical, performance-based mastery as this is rare. I also feel that Shakespeare would have thoroughly enjoyed it, something I can’t say for all adaptations of his work. It is difficult to pinpoint an exact reason why I believe the Bard would love The Tragedy of Macbeth, but visuals conjured up of him sitting alongside Joel Coen, in a dark theater smiling at the product of his dedication to the world of literature fills me with happiness.
YOU MAY LIKE
Ashton reviews Minari:
https://www.suzeebehindthescenes.com/2021/03/movie-review-of-minari-haunting.html
Ashton Reviews Ozark:
https://www.suzeebehindthescenes.com/2022/02/a-review-of-ozark-what-we-know-what-we.html#more
Follow/Visit Ashton on Twitter: @Ashboomstick2
Email ThisBlogThis!Share to TwitterShare to FacebookShare to Pinterest
Newer Post Older Post Home