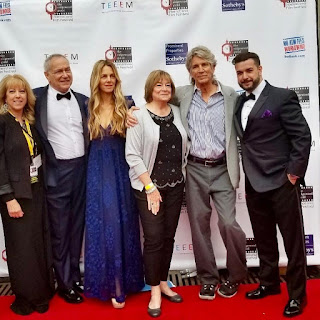 The successful and growing Ridgewood Guild International Film Festival is entering its 11th year. Last year the festival was virtual for the first time due to the pandemic. Now with a healthier forecast, The Guild is returning to a live and in-person festival in downtown Ridgewood in late April. The most recent in-person festival included a premiere of a film starring Oscar®-nominated actor Eric Roberts, who attended in person and took photographs with fans on the red carpet in front of Warner Bow Tie Cinema on Ridgewood Avenue. Other movies shown at the festival include independent films, digital shorts, foreign-language films, student shorts, and music videos by local and regional filmmakers as well as those abroad. For updated information visit https://ridgewoodguildfilmfest.com/

Films are still being accepted via Film Freeway. For information visit:  https://filmfreeway.com/RidgewoodInternationalFilmFestival

This year films will be shown over 5 days in 3 different venues, as follows: World Film Day at Ridgewood Library on April 24th; the traditional portion of the film festival at Bow Tie Cinemas on Ridgewood Avenue with Red Carpets on April 27-28th; and the Human Rights portion of the festival at the Unitarian Church on April 29-30th. Check the website for updated details on the special guests for this year's festival.

You May Like: Wrap Up of 2019 Festival with Eric Roberts:
https://www.suzeebehindthescenes.com/2019/05/its-wrap-ridgewood-guild-international.html

To kick off this year's festival,  The Ridgewood Guild International Film Festival is holding it's annual "An Evening with Oscar" party on Friday, March 25th at Park West Loft, 38 Oak Street in Ridgewood from 8:00pm – 12 midnight. This fun event is open to the public and is filled with excitement, movie trivia, and fine food and drink.

You May Like: The LIBBY Show: Lunch with the Ladies -
A New Lifestyle and Entertainment Talk Show on Youtube from BehindtheScenes:
https://www.youtube.com/channel/UCgVU40peyhgLAYQ00x9UjMQ

Rub elbows with fellow movie lovers and some people in the film business. Guests also get to walk the "Red Carpet" and pose for photos. There will also be a DJ, dancing and a trivia and a costume contest with some great prizes from local businesses. You can dress formally or in costume as your favorite Oscar-nominated character, past or present. The cost is $65 per person, which includes a two-hour open bar, passed hors d'oeuvres, pasta station, salad and dessert. [Venmo: @RidgewoodGuild] 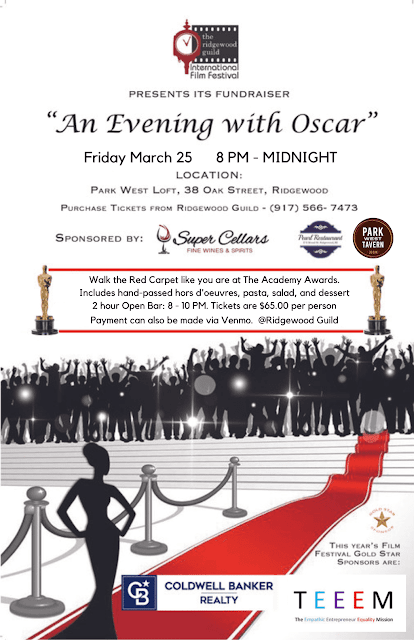 Event chairperson Jim Suozzo says, "You'll have a good time and meet people you may not have met otherwise. Most importantly, you will be supporting the arts in this community." The party’s Signature Sponsors are Super Cellars and Pearl Restaurant in Ridgewood. The party is a fundraiser for the festival which awards prizes in several genres of film and also gives $500 scholarships to the directors of the two best films by students, funded by the Guild’s Gold Sponsors – TEEEM, Park West Tavern, and Coldwell Banker Realty.