The Amazing Earper Fandom of SYFY Network's Wynonna Earp: Interview with Filmmaker Carole Lowe On Her Mission to Make a New Documentary about this Incredible Fandom 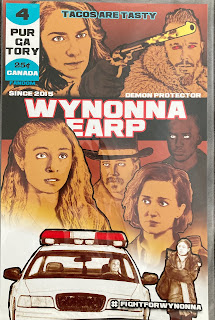 Do you know what an Earper is? If you're not already with this popular SYFY Network series then you'll probably be surprised by it's fandom. In this interview with filmmaker and Earper herself Carole Lowe you'll find out why she and her colleague Adriana Torres are on a mission to tell their story. And you'll hear about their crowdfunding campaign with some really cool Earper perks in it.

Suzee: Tell me what this documentary is about.

Carole Lowe: Well, it's about the amazing fans of the supernatural/western series Wynonna Earp! This fandom is simply amazing with their support of the show and the cast.  Over the past few years they have purchased hundreds of billboards in Time Square, which they live streamed to fans around the world to promote the series and help secure a forth season. They raised hundreds of thousands in the name of the series to support non-profits, started sold out Earper Conventions around the world which hosted cast members, and have supported each other in astonishing ways.

Suzee: Why are you making this?
Carole Lowe:  This fandom has awesome stories to tell.  For example, fans will use the hashtag #EarperSupport when they are having a bad day, needs help or assistance or just  want to talk with someone.  The people, all volunteers, will answer the hashtag 24/7.
Sometimes fandoms get a bad wrap, this one has a positive outlook and a "never give up" vibe.  Their stories are touching, inspiring and need to be heard. Our thought is, make the film and get it out to the public so everyone will know about this awesome international group of fans.
TO SEE THE CAMPAIGN:
https://seedandspark.com/fund/where-they-go-we-go-a-look-inside-the-earper-fandom#story
You May Like: A New Talk Show for Women
https://www.youtube.com/channel/UCgVU40peyhgLAYQ00x9UjMQ
Suzee: Are you an Earper? What got you to start watching and how soon were you hooked?
Carole Lowe:  Back in 2018 I attended a multi-fandom con with a show that I work on, Venice the Series.  While setting up our booth I had numerous Earpers offering help, bringing me bottled water and even offering snacks and giving me parking advice!  As I interacted with them, they all asked if I was familiar with Wynonna Earp and shared with me details about the series.
Over the weekend there were fans standing in line to get autographs in front of our booth.  During most days they were in line for cast from the series.  Everyone that stopped in front of our booth would very kindly ask if we watched the show and begin to tell us about it.  When I came home I decided to check it out and I was hooked!
Suzee: What is your favorite episode?
Carole Lowe: That's a tough one to answer.  I like a number of episodes but if I had to choose one it might be from Season 2, Gone As a Girl Can Get.  It's an alternate universe episode and there were just so many interesting twists.  But On The Road Again and Old Souls from Season 4 both coming in a very close 2nd.Suzee: Favorite character?
Carole Lowe:  Nicole Haught.  She started out as a character only set to appear in a handful of episodes as Deputy Haught and ended up as a friend to all in Purgatory and will fight fiercely for her Found Family.
Suzee: Why do you think that so many people are drawn to this show?
Carole Lowe: There are a variety of reasons.  It's not just about demon hunting, which Wynonna does, but also about strong female characters, friendship, love, diversity, inclusion and representation.  Also, the cast has embraced the fandom.  When new episodes were dropped the fandom would live tweet the show along with the cast. There's a bond that has grown out of this.
Suzee: Give us a hint as to what some of the strangest/best/funniest things that Earpers have done?
Carole Lowe: One of the coolest stories I'm familiar with took place during the early part of the pandemic.  There were a number of fans on lockdown in assorted states and countries.  They started a Zoom call that was live for, I believe, weeks.  So anytime one of these fans on this Zoom wanted to talk with someone, there was always someone there.
Another amazing story was when someone reached out to #EarperSupport when their home was heavily damaged in a tornado.  The person answering the #EarperSupport on Twitter was able to eventually locate housing for the displaced family.
You May Like: Interview with Tim Rozon-
https://www.suzeebehindthescenes.com/2019/12/interview-with-versatile-actor-tim.html

Suzee: Tell me about what you do in the industry/your background to do this doc.
Carole Lowe: I've worked in the industry for over 25 years.  I started out as a Production Assistant and moved around to numerous jobs and studios over the years.  I've worked as an assistant to the Associate Producers on a television series, a production coordinator on a game show, product placement at Warner Bros., props, set dressing and just about anything else you can think of.
I currently work with Crystal Chappell's Open Book Productions which produces streaming content including the Emmy winning series, Venice the Series.  I'm working on this documentary with Adriana Torres.  Adriana is a cinematographer, director and editor who has worked on numerous films, documentaries and more.  She also works with Open Book Productions.
And now a little about you personally:
Top Five Movies?
Anything Sandra Bullock does
Best way to Destress?
Hike or walk my dog.
NY or LA?
Love both but will go with LA since I live here!
Top 5 Shows you are Binging?
Wynonna Earp, Ozark, The Crown, and Clickbait on Netflix.  I'm also into watching documentaries and true crime shows.
Mantra you Live by?
Life is short, enjoy what you do
Email ThisBlogThis!Share to TwitterShare to FacebookShare to Pinterest
Newer Post Older Post Home