Movie Review of Minari: A Haunting, Beautifully-Filmed Story of Korean Immigrants Never Giving Up on the American Dream 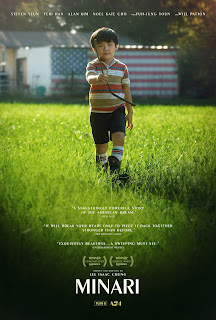 When anyone in society is called upon to adapt to a new way of life, it can prove difficult. While simple changes, like purchasing a new car, can cause momentary angst, monumental changes like moving, attending a new school or adapting to conditions of a pandemic, can be the most challenging for some to endure. Either way transitions are not easy, but this can be especially so if the people involved are immigrants, thrust into a completely different culture, language and way of life.

Director Lee Isaac Chung took this concept, along with his own childhood memories, and crafted Minari,  a compelling, melancholic, and heartfelt ode to the resilience of immigrants in wanting to retain a sense of the culture that makes them who they are all while taking a stab at the American Dream. The film is my new favorite of 2020 and if people continue giving it the love it clearly deserves, it could become the second year in a row that a Korean film wins an Academy Award. The film is just that impressive: with haunting, soul-stirring music, breathtaking cinematography, excellent performances across the board and a wonderfully-realized message that is, at its core, metaphorically related to the title itself.Many might not be cognizant of what the word "Minari" actually means, but the key to unlocking the full power of the film lies in understanding both the literal connotation of the word and the metaphor behind it. Minari is a popular bitter South Korean herb implemented in a variety of their dishes, as well as a health tonic. It is easy to grow, but most importantly, it can thrive wherever it is planted. Minari can be transplanted to any location and adapt exceptionally well to its new surroundings, all while maintaining its innate characteristics. So what is the metaphor behind the minari plant as we delve into the struggles of the immigrant family that is the focus of this film?Minari details the relocation of a Korean-American family from California to rural Arkansas, where Jacob Yi, patriarch of the family, and his wife, Monica both worked long hours at the monotonous job of checking the gender of thousands of chicks a day (the females are used for eggs and meat while the males are discarded, as not being useful).  Land is cheap in Arkansas, thus this is the primary motivation for the move in addition to the fact that Jacob has a dream of being self-sufficient by farming his land and growing Korean vegetables on what he firmly believes to be among the best American soil.
You may like Ashton's Reviews of Mangrove - Small Axe:
https://www.suzeebehindthescenes.com/2021/01/film-review-of-amazons-mangrove-small.html
Jacob has clearly subscribed to the American Dream philosophy that anyone, regardless of class and ethnicity can attain their own vision of success. He believes that his new farm is his own Garden of Eden awaiting his command. He will literally plant his roots in American soil. This is where the metaphor comes into play. Just like the minari, Jacob and his family have left their homeland, and appear able to adapt to their new environment, all while maintaining the essence of their culture and their traditions.

However, the assimilation doesn’t come so quickly. In fact, almost the entire first half of the film depicts the disintegration of the marital relationship between Jacob and Monica, as they face challenges related to their farm, housing and medical issues of their son, David. The trouble and hard work for the family increases until it seems like there’s nowhere left to turn. That’s when the saving grace of Minari comes in, Soonja, played to perfection by the wonderful Yuh-jung Youn.As a grandmother and guide for the family’s path of hope and ultimate assimilation, she is a spiritual and symbolic healer with many words of wisdom to offer. Most importantly, she is the one who brings the minari seeds from South Korea to Arkansas, asserting that the plant will grow beautifully. She also provides solace and comfort, silently abiding the negativity and failures that repeatedly cause Jacob to question the validity of his dream. In the end, just as the minari perseveres even after being ripped from its native soil, so too does the family, against all odds and conditions. The minari is not just symbolic of the resilience of this immigrant family. It is symbolic of every family that came to America, seeking to plant the seeds for future generations to take root here and flourish.
For More Information:
https://a24films.com/films/minari
Email ThisBlogThis!Share to TwitterShare to FacebookShare to Pinterest