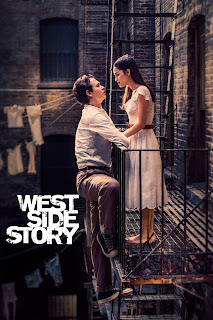 By Ashton Samson
Ever since the first heard the album for its original 1957 Broadway production, Steven Spielberg has wanted to make West Side Story and now he’s finally done so, arguably making a superior film to the 1961 version. Skeptics may call this an unnecessary remake, but if you truly understand Speilberg, then you’ll see that it is a worthy remake that both honors the original film’s legacy and wisely updates the story for our current times.
For one, the film utilizes twenty Puerto Rican (and Colombian) actors unlike the original, which cast American actors whose faces were painted to appear Puerto Rican.  As good an actress as Natalie Wood was, she was never the right Maria, but Rachel Zegler, the twenty year old breakout actress is the perfect choice, not only because she is of Colombian descent, but because of her superior vocal talent. Wood’s voice was dubbed, but Zegler actually sings the songs with grace and eloquence.
Speaking of singing, the vocal range of the actors is impeccable, as well as the dancing and choreography, especially by Zegler and Ariana Debose, who is a scene-stealer as Anita. While these changes certainly enhance the film and make for a more authentic, thrilling experience, the decision to replace the character of Doc from the original with Valentina, played by Rita Moreno and to highlight the racial tensions and violence is what elevates this film to essential viewing.
Ashton Samson Reviews Ozark:
https://www.suzeebehindthescenes.com/2022/02/a-review-of-ozark-what-we-know-what-we.html
Much of Valentina’s dialogue is new and this is one of the ways that Spielberg, who has had a social justice and humanitarian angle present in many of his films, highlights West Side Story’s principal themes of bigotry, xenophobia and racial divide, amidst a backdrop of love. The scenes of violence are more aggressive and fierce. Valentina’s dialogue is sensational; one particular scene towards the end of the film is especially brilliant and serves to update an already powerful scene to feel more timely and urgent.
And therein is the key to why this film deserved to be made: the inclusion of Valentina, the assertive emphasis placed on the story’s thematic content and the addition of Puerto Rican and Colombian actors speaking largely in their native tongue makes for a more progressive, inclusive experience, while also highlighting the unfortunate reality that intolerance and racial division is still ever present.
Email ThisBlogThis!Share to TwitterShare to FacebookShare to Pinterest
Newer Post Older Post Home