Interview: Real Housewife of NJ Margaret Josephs Reveals the Woman Behind the Housewife, Talks about her Journey to Success and Gives us a Hint as to What's in Her New Book: Caviar Dreams, Tuna Fish Budget - How To Survive in Business and Life: Book Signing March 9th in Ridgewood, NJ 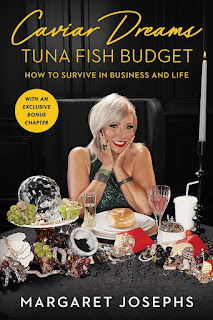 Margaret Josephs, widely recognized for her role on the hit franchise the Real Housewives of New Jersey of NJ since 2017, has authored a book. It's called Caviar Dreams, Tuna Fish Budget: How to Survive in Business and Life. If you're in the New York tri-state area, she's doing a book signing on March 9th at Bookends in Ridgewood NJ.