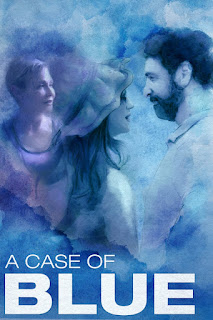 Where does creative inspiration come from? We talk here with Writer/Director Dana Glazer whose movie A Case of Blue is now streaming. If you are a Joni Mitchell fan, you might already have has an inkling that the film might have some relationship to her work just be hearing the title. Read more about how Dana used one of his favorite artists as a muse for his film.

SBTS: "A Case of Blue" - tell me about how you were inspired to name the movie after her album "A Case of You".

Dana Glazer: The film title is an amalgamation of Joni's songs, not from one song specifically. Certainly, the Blue album was a really big influence on me when I was in my 20's and trying to find the right life partner. The tug-pull of Joni's desire to find romance while also having total freedom spoke to me.
Additionally, the album was so much about the illusory nature of romance and how it's easy to project one image of an ideal mate onto others. And lastly, there is such joy in the album ("I want to talk to you, I want to shampoo you again and again..") and such sadness. ("I wish I had a river I could sail away on...") When I wrote the script, I listened repeatedly to Blue as well as the other albums by Joni of that era as it put me in touch with that 20 something version of myself from long ago.
SBTS: Why did you use her music as an inspiration for the film/how did you work it in?
Dana Glazer:  On one level, A Case of Blue is a story of an artistic and youthful awakening of a man who is grappling with the onset of old age and all the challenges inherent in that stage of life. The album Blue came out in 1970 and that would have been when this man was in his early 20's, so I felt it was a useful reflection of him trying to relive that moment in time.
SBTS: So I heard there are a few "Easter eggs" for Joni Mitchell fans in the movie?
Dana Glazer:  For those who know and love Joni's music, I thought it would be fun to add a layer into the film where there are all these references to her songs and to characters in her songs. The obvious ones are the film character's names like Richard, Amelia and Carey but there are tons more to discover!
How big of a fan are you? What is your favorite song or album and why does it resonate so much with you?
Dana Glazer:  I'm sure there are bigger fans than me but Joni's work holds a special place in my heart as I'm sure it does for so many listeners. I suppose that in some weird way (I'm happily married) the doomed romantic she sings about in "The Last Time I Saw Richard" kind of fits me. The joy and pain of "All I Want" always stood out for me. "Down To You" from the album "Court and Spark" always tapped into that painful longing I felt when I was in my early twenties before meeting my wife.
You May Like: Beth Brier Reviews A Case of Blue
https://www.suzeebehindthescenes.com/2021/01/film-review-case-of-blue-features-award.html
SBTS: Do you think Joni Mitchell would like this movie and why? What would you want to tell her about it if you had her ear?
Dana Glazer:  Oh gosh, if I met her, I think I'd just blush a bit. I have no idea what she'd think about this film. What I would hope is that she could understand it was made from a deep place inside of my being and that I have an incredible amount of gratitude for her adding to some of the magical wallpaper that lines those interiors.
Streaming Now on Most Plaforms
For More Information:
https://www.acaseofblue.com/
Email ThisBlogThis!Share to TwitterShare to FacebookShare to Pinterest
Newer Post Older Post Home