Review of The Many Saints of Newark: Stellar Performances but Misses its Mark - Does David Chase Have Another Target in Mind? 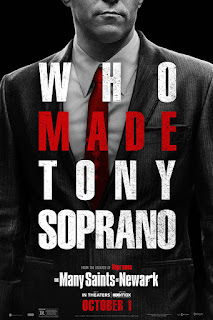 By Ashton Samson
3/5 🤮🤮🤮
I never thought I would wake up one morning to find myself writing anything critical whatsoever about David Chase's work, but The Many Saints of Newark fell short of Chase's original television phenomenon, The Sopranos.
There are a few positives that may make it worth a watch for an avid Sopranos fan, such as wonderful acting, accurate depictions of the Newark race riots, excellent music reminiscent of the era and a few good ole fashioned mobster shootouts. My recent review of The Sopranos memorialized why I loved the show and why it will remain a legendary television phenomenon. However, it is essentially devoid of the pizzazz that made the show so fantastic.
There is still the question of who made Tony Soprano
As the summary states, “Anthony Soprano is growing up under the influence of his uncle Dickie Moltisanti, the man who will help make the impressionable teen into the all-powerful mob boss we’ll later come to know: Tony Soprano.”
Ashton's Review of the Sopranos Series:
Why he Spent His Summer Watching 86 Episodes
https://www.suzeebehindthescenes.com/2021/10/review-of-sopranos-view-of-this-iconic.html
There was little reference to this storyline. Tony and Dickie are only in a few scenes together and none of them convey that Dickie is teaching Tony the ways of the mob or influencing him to follow into the family business at all, unless stealing speakers is enough to one day follow in the footsteps of a mob boss. When the title was announced, I assumed that it referred to “Moltisanti", which means "many saints" in Italian. It was not a stretch to infer that the deeper meaning of the title might have been a purposeful play on words in that Dickie was hardly a saint. Following from this one might expect to see examples of why Dickie wasn’t a saint - that he gradually coerced Tony into joining the mob.
Another aspect that the film doesn’t fulfill is the importance of the Newark race riots to the Sopranos universe. There are some exceptional shots accurately representing the events that transpired during the riots, but other than one small subplot that really doesn't amount to much. Additional scenes that gave more examples of the contrasting views between the two groups and that connected to the principal story would have given the film more dramatic weight and perhaps the opportunity to provide a message of social commentary.
The Sopranos was never a very fast-paced show, but that was alright, because there was so much life and purpose to each scene that it was barely noticeable. The slow pace was also done purposely, I believe, to spend the necessary time with each character and their complex story arcs. The Many Saints of Newark, however, is slow moving with no reward at the end.
A large percentage of scenes in The Many Saints of Newark are rehashes of stories told by characters on The Sopranos. Examples of stories told on the show that are seen here include the time Johnny Boy shot through Livia’s beehive hairdo, as told in “Sopranos Home Movies,” the carnival bust that was already in part captured in “Down Neck,” and the often used phrases “He never had the makings of a varsity athlete,” uttered by Uncle Junior and “Poor you,” by Livia. All of these references in the film are entertaining, but they seem more like a montage in a video, rather than part of an actual film.
Some Standouts of Exceptional Performances
Some of the actors gave truly exceptional performances. The standouts for me are Vera Farmiga as Livia, John Magaro as Silvio and Michael Gandolfini as Tony. They each mastered the mannerisms and defining characteristics of the people we would come to know.
A Method to His Madness?
The reason why the Many Saints of Newark disappointed me was just simply that it paled in comparison to the iconic status of the show. Yet, there are inklings that all may not be lost. Some have alluded to the idea that there was a "method to the madness", that David Chase has a bigger plan that might help us navigate this film from a different perspective. In light of the recent contract he made with HBO, I look forward to that possibility. Perhaps he will bring us more Sopranos content, rectifying my issues with The Many Saints of Newark and leaving any further negative opinions in my subconscious, never to see the light of day in any form again.
For More Information:
https://www.themanysaintsofnewarkmovie.com/
Note: This article was edited.
Email ThisBlogThis!Share to TwitterShare to FacebookShare to Pinterest
Newer Post Older Post Home