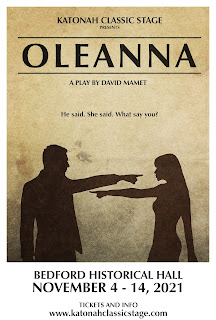 Are you yearning to partake in New York’s recovering culture? Are you tired of watching things on that slightly-too-bright LED TV or your tiny laptop screen? A live play might be your answer. Katonah Classic Stage (KCS) brings Oleanna to the stage November 4th through the 14th, 2021 at the Bedford Historical Hall in Bedford, New York outside of Manhattan. The cast includes many talented actors from the NYC area as well as Broadway/Film/TV actor Jordan Lage (Succession, Madame Secretary) and Actress Lea DiMarchi (This is The Night), This two-hander drama centers around the riveting miscommunication between a professor and his student, studying how power struggles and political correctness can distort a situation-- and not always for the better.

Katonah Classic Stage promises to breathe new life into this 1992 off-Broadway classic by David Mamet. The play’s original debut was following the wake of the Anita Hill hearings against Clarence Thomas, as the world eagerly watched how these accusations played out in the media. History repeated itself over a decade later with the accusations against Brett Kavanaugh in 2018, making it only right that this play debuts its return to the stage among the discourse in recent years. KCS’s Oleanna revisits this story with the newfound lens of the #MeToo movement, political correctness, and cancel culture.

The Katonah Classic Stage Founding Artistic Director Trent Dawson is an actor and director, best known for his longstanding, Emmy-nominated role on As the World Turns, who has been working on television and on stage for nearly 30 years. He and his creative team chose "Oleanna" for the 2021 Fall production.
You may like: What's going on at the Katonah Classic Stage Film Festival
https://www.suzeebehindthescenes.com/2021/08/emmy-winner-trent-dawsons-katonah.html

“Aside from being a magnificent display of playwriting craftsmanship, the piece feels so relevant to the current dialogue,” states Trent Dawson, Katonah Classic Stage's Founding Artistic Director and accredited actor and director. “After seeing this show, I want people to leave the theatre inspired to continue these conversations. Go grab a drink and debate, discuss, and, ultimately, decide where you stand on these important issues”

KCS hosted their second outdoor, annual film festival at the Bedford Playhouse this past August, as well as a masked, socially distanced, one-man show, Will Eno’s Thom Pain (based on nothing), in late April 2021. Similarly, with Oleanna, KCS will continue to monitor Covid-19 conditions and they will take all necessary precautions to keep attendees safe.