Females in Entertainment Interview: Writer/Director Caytha Jentis Talks about her Pandemic Short April Showers with Bill Sage and Lorraine Farris and her Feature Pooling to Paradise 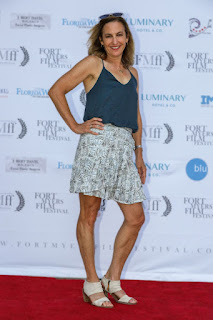 By Suzanne Ordas Curry
I met Caytha many moons ago when her film Bad Parents premiered at the acclaimed Montclair Film Festival (NJ). Bad Parents was her third feature, after And Then Came Love and The One.
Now she has a short screening at Monclair, one she filmed during the pandemic - because there are some things like creativity that cannot be crushed by Covid.  We talk about her short, April Showers and also about her newest feature, Pooling for Paradise which is streaming just about everywhere now.
Tell me about your latest feature Pooling for Paradise - a road trip movie with a rather interesting group of passengers!  What inspired you to write it?
Caytha: My thirty-something friend and I were in a Lyft on our way to dinner. I began chatting up the driver as I often do since making random connections is a favorite pastime of mine. I have met many interesting rideshare drivers in Los Angeles – a flat-earther, a musician, a former studio executive, a local politician… Ours did not disappoint. In his late twenties, we easily engaged in conversation that touched on philosophy, feminism, science fiction and anarchy. He was a film director who proudly identified as a recalcitrant.

We were mid conversation on Plato when we arrived at our destination, a casual Italian restaurant. My friend and I were meeting a mutual guy friend. Our fourth diner dropped out last minute, so I asked our driver to join. Only momentarily thrown by the offer, he also was not ready to end the conversation, so said “sure!”

The dinner conversation flowed. Over his second slice, our driver with a boyish Cheshire cat smile announced: “My friend found love in Paradise!”  He had our attention. We were intrigued – of course. He shared the story of his buddy who had stupidly cheated on his girlfriend. Unable to forgive, she broke up with him, and moved back home to Paradise, Nevada. Full of regrets, his friend quit his job in L.A. and moved to Paradise to win her back. Now, a year later, they were getting married. As a hopeful romantic, I was taken by this bittersweet love story, but as a pragmatic (cheerful) nihilist, our driver was unsure if it was actually a good thing.

That night and the Paradise story morphed into this road movie. The characters are loosely based on the four diners composited with other older millennial friends of mine who, like them, were grappling with ‘adulting’ existential dread as experienced by their generation: when to give up on a dream, student loan debt, fourth wave feminism, identity, making ends meet in today's gig economy, and finding real connection.

This movie is about my fictional foursome finding the courage to be vulnerable, the power to forgive and selflessness to accept and honor all kinds of love - romantic, familial, friend and of oneself. That is Paradise. 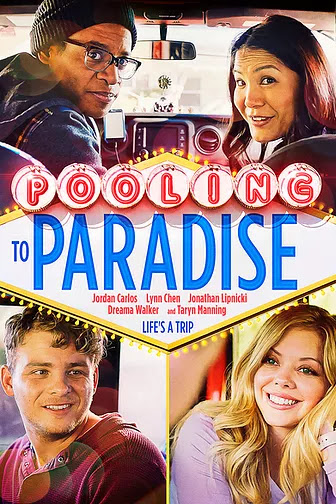 Suzee: Who do you think will appreciate this message?

Caytha: The movie seems to resonate with audiences who see elements of themselves in the characters or connect with the movie’s themes. It’s a comedic drama.

Suzee: You are a tried and true New Yorker. And a pandemic is not something to slow you down. Tell me about your inspiration for the short April Showers.

Caytha: New York was initial epicenter of the pandemic, and we were all so scared as we knew very little about the disease.  I watched how all relationships and how we lived suddenly changed.  I wanted to tell a story about an intimate relationship that was changed forever during that first wave of the pandemic.  I’ve been told it’s incredibly poignant.

Suzee: Tell me about the production process. Where can we see Pooling to Paradise? And where is your short April showers screening?

Caytha: Pooling to Paradise is playing on Amazon as well as other streaming platforms.  April Showers is dong the festival circuit and playing at the Montclair Film Festival on 10/29 and New York International Film Festival on 11/4.

Suzee: You have an exciting new project in the works - not a film but something related...please dish!

Caytha: It's the Gold Standard Arts Festival. This is a film, theater and comedy festival that will showcase and celebrate emerging and established artists 50 years and older.  It’s no secret that ageism exists, especially in the entertainment business.  This is our way of combatting that.  Our larger goal is to offer year-round programs to support emerging artists in this age group.

Do you have any thoughts on the young world of entertainment and how important it is to recognize that people over 50 are still vibrant creators and movers and shakers in this industry?

Caytha: I think there’s room for all types of artists and stories.  Older people are great mentors as well.  It’s important to bridge not only races, religions, sex preferences/orientation but age as well.

And now a few quick questions:

Shows You Have Been Binging:

I did you want Squid Game which enjoyed very much.  Same with Click Bait.  Now moving on to Maid.

I’m not the best at that question, but happy when Love Actually is in the rotation. But there are so many great films.  I’m definitely most interested in character driven stories.

Best place to create in NYC?

I think the whole city is a great place for me to create.  I find stories through the human condition and unexpected connections which happens all the time is you allow it to. It’s also a great place to produce as the city is very film friendly.

Best place to eat in NYC?

Similar to the movie question, it’s hard to come up with one.  My husband and I love to find new places to dine, and a great way to explore neighborhoods.   Lately I’ve been going to Amalie on the Upper West Side.  They are a small French restaurant that has great wine with generous pours, great food and great service. One of the positives to come out of the pandemic is all the outdoor restaurant installations.

For Information on Pooling to Paradise:
https://www.poolingtoparadise.com/
For more on Caytha:
https://www.foxmeadowfilms.com/team
https://www.instagram.com/caytha/?hl=en
Email ThisBlogThis!Share to TwitterShare to FacebookShare to Pinterest
Newer Post Older Post Home