Sit under the stars, enjoy some new films and eat your popcorn at one of the only in-person film festivals since the pandemic in the New York tri-state area in Katonah, NY.

The Katonah Classic Stage Film Festival (KCSFF) initially started as a drive-in event during Covid-19 when there was no live theatre. Due to the positive response, KCS is now proud to present their second annual film festival featuring short films from around the world—including a few local filmmakers and actors. The film festival was started by Daytime Emmy-nominated actor Trent Dawson. 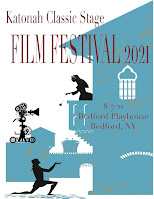 This year, the Bedford Playhouse is hosting this outdoor event on their lawn where you can either bring your lawn chairs or a blanket, enjoy a picnic brought from home or movie concessions from the Playhouse, and you can kick back and view these fantastic movies under the stars! Enjoy a night out and get together with friends to discuss your favorite film; you can even vote in the KCS poll to choose the winner of the coveted Audience Favorite Award. Information about KCSFF Official Selections will be added to our website soon.

The event will be held on Saturday, August 7th. Seating starts at 7:30 and films start at sundown.

Here are a few examples of the amazing short films in the lineup....

Forty Years From Now (Mahopac,USA) Forty years after graduation, three High School friends reunite to fulfill a pact to dig up a coffee can they buried containing predictions and secrets written by their younger selves. The contents spark revelations about their past, while potentially changing the course of their futures.

The Scottish Play (USA) A troupe of actors and stage crew of an amateur theatre company struggle when the lead player is replaced by an understudy. This performance of Shakespeare's most ill-fated tragedy beckons the supernatural through this backstage dark comedy full of theatre superstitions and mythos as the energy and source of the performance is finally revealed.

Connected (USA) In a near future world humanity has been deprived of closeness of each other through technological communication advancements. A sound of a human voice has become almost forgotten, a touch of a person close to you almost extinct and direct interactions almost forbidden. A small boy, Timmy full of curiosity and need to learn the world that surrounds him goes on a journey to learn the value of interpersonal communication, human emotions and expressing them through discovering the underground art of theater. The boy attempts to adopt a play portraying an early 21st century family into his own relationship with his parents.
SEE ALL OF THE OFFICIAL SELECTIONS HERE:https://www.katonahclassicstage.com/films-2021
Tickets are here:
https://www.katonahclassicstage.com/events
August 7, 2021, at the Bedford Playhouse: 633 Old Post Road Bedford, NY 10506
Seating begins at 7:30 and the films start at sundown.
Here is the Official KCSFF Trailer for a sneak peek at the films: https://youtu.be/9jMU1tI3rDY
For info and tickets:  www.katonahclassicstage.com/events
Follow Katonah Classic Stage here:
Facebook: https://www.facebook.com/KatonahClassicStage
Instagram: https://www.instagram.com/katonahcs/
https://www.katonahclassicstage.com/events