Our Roundup: What Females in Entertainment are Doing in 2020 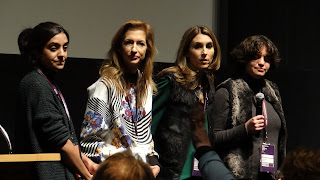 Here's our roundup of just some of what the #femalesinentertainment are doing this year.

Editor' Note: This roundup used to appear on our sidebar, and will now appear as a clickable article on the sidebar. Updated regularly.

Better Things by Pamela Adlon renewed for Season 5....Mariah Carey Memoir coming as a book....Javicia Leslie to be new Batwoman...Dead to Me Renewed for final season.. can't wait but hope it goes longer!...
May 2020 - Sharon Hoffman becomes top Producer at Jimmy Kimmel Live..love the home edition BTW...Wendy Williams out for awhile due to health issues...Rest in Peace Lyne Shelton and thanks for your direction and mission...Good Girls renewed at NBC...A Little Late with Lilly Singh renewed at #NBC...Sofia Coppola on team for Custom of the Country on Apple...Queen Lattifah's new show Equalizer set for #CBS...April 2020- Amy Schumer do to new cooking show for the #FoodNetwork called #AmyLearnstoCook.... New #DoogieHouser in the works with a female lead on #DisneyPlus...

Febuary 2020- Viola Davis to play Michele Obama in new #Showtime series called #First Ladies...Julia McNamara to head CBS ALL ACCESS...Judith Light to get Variety Icon Award at Cannes Film Festival...Kelly Campbell promoted to President of #HULU... Bethenny Frankel to do business competition show on #HBO MAX called The Big Shot with Bethenny Frankel... Megan Fox to star in new movie Aurora... Jada Pinckett Smith's Red #RedTableTalk renewed until 2020... Days our our Lives gets another year renewal... Tina Fey and Amy Poehler to host 2020 GOlden Globe Awards.. Olivia Coleman to star in HBO show #Landscapers...#MarvelousMrsMaisel is getting a Season 4 on AmazonPrime. If you have not watched this yet, you're in for a treat.... Five females to direct major studio films: Wonder Woman 1984 with Patty Jenkins returning, Eternals by Chloe Zhao, Birds of Prey by Cathy Yan, Black Widow by Cate Shortland and Mulan by Niki Car...Helen Mirren to receive Lifetime Achievement Award at Berlin Film Festival....Frozen 2 icing out competitors at the box office internationally as well...Holly Hunter to star in new #TinaFey comedy on #NBC.
Ellen DeGeneres that busy lady working on 4 new shows at HBOMax....Wonder Woman Director Patty Jenkins signs a TV deal at #netflix...Margot Robbie to star in new Comedy called Fool's Day...Sag Aftra new prez is Gabrielle Carteris....Disney Plus to have female superhero animated show called Ms. Marvel... Speaking of Ms and Marvel #TheMarvelousMrsMaisel new season starts December 6th...Disney Plus also doing a remake of Lizzie McGuire..New series based on the movie Serendipity, a fave with Kate Beckinsale and John Cusack over at #NBC... Drew Barrymore in talks for a talk show at #CBS..
Archives: 2019

Gossip Girl Spinoff coming to HBOMax....Greta Gerwig and Noah Baumbach writing new script for #Barbie starring Margot Robbie... Taika Waititi to direct next #Thor Movie with Natalie Portman as Thos... Demi Moore- remember her when she was on #GH?,, coming to #BraveNewWorld series on USA Network..
Mindy Kaling teams up with Netflix for series on her childhood...Lilly Singh to replace Carson Daly in Late Night.. Mad About You Revival picked up by Charter Spectrum...Ava DuVernay to create romance series at OWN...Kathy Lee Hoda to leave the Today Show…. Jane the Virgin gets a Spin Off at the CW….Sarah Jessica Parker’s #Divorce renewed for Season 3 at HBO…..Ms. America series on Fox to star Cate Blanchett as Phyllis Schlafley….New Prince Documentary coming soon directed by #AvaDuvernay….An Acceptable Loss’ Tika Sumpter to Star in Trader on HBO….Emma Roberts to star in ice skating show on #Netflix….Margot Robbie to be Barbie in new movie….CBS appoints Laurie Rosenfeld as Chief People Officer at the network….#JulieRappaport to co-head movie division at Amazon…

Revival of Veronica Mars coming to Hulu….Nicole Clemens is new Prez at Paramount TV…Younger TV show moves to Paramount… Kelly Clarkson getting her own talk show….Bewitched is another series to get a reboot…#MurphyBrown not picked up for new shows, please give it some time…..#JenniferLopez to star in movie Hustlers…#JamieLeeCurtis to star in political thriller #AnAcceptableLoss in theaters January 2019…Jane Krakowski and Hailee Steinfeld star in Apple series about Emily Dickinson… Middle spinoff staring #EdenSher in the works at ABC, catch her in an episode of this season’s #Superstore….#KanaStatic to star in new movie Liberte about female spies in WW2, a film by #SarahMeganThomas….#AnnapurnaSrirum to star in new movie #CaseofBlue coming 2019….#Supergirl movie on the way….Jennifer Mullin is new head of FremantleMedia…Lots of good stuff coming from #ReeseWitherspoon on her #HelloSunshine Channel….

As a THANK YOU to our readers, we're giving away TEN $20 Gift cards to Amazon or Target in the months the of March. Winners will be announced on August 4, 2020. All you have to do to win is enter your email in below - as winners will received E-Gift cards. There is no obligation whatsoever, your name will not be mentioned and your email will not be shown to anyone but us.
Winners will be notified by email. You can only apply once. Good Luck! In the message, please write "Giveaway" or tell us your favorite movie!