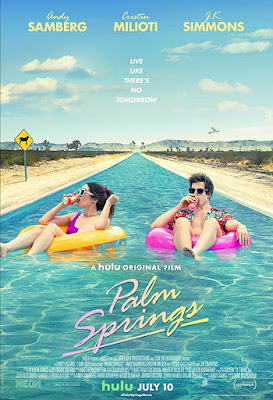 I am a big fan of romcoms and comedies. I was excited to be able to see Palm Springs on Hulu the first night it was available, without paying a premium. (So I am waiting to see King of Staten Island until the price comes down). That gives you an idea of what I will accept in a comedy.

I also do not want to know much about a movie before I watch it. I want to be surprised. I also do not read the reviews. I may watch a few minutes of the trailer and then stop it because in these days of instant gratification, most trailers give way to much away.

So did I like it? Well, it was no Groundhog Day. Groundhog Day had purposeful meaning and could be watched by the family. This was certainly not a family movie. But, it kept me engrossed to see how it would turn out and had some very LOL moments. As far as physical comedy and laughs to make you forget about what is happening outside the room you're watching it in, it did the job as providing comedy to the pandemic-drained population.

And speaking of the pandemic, as much as I know life on Planet Earth will return to some kind of normal, a movie that centers around a wedding with a whole bunch of people drinking, dancing and standing close to each other without masks on was just bittersweet. So call this movie pure escapism.

In a nutshell, the main characters, Nyles (Andy Samberg) and Sarah (Christin Milioti) find themselves stuck in a timeloop. He gets stuck in it first, and then she follows him in so they are stuck in it together. What's that's saying now, we're all in this together? 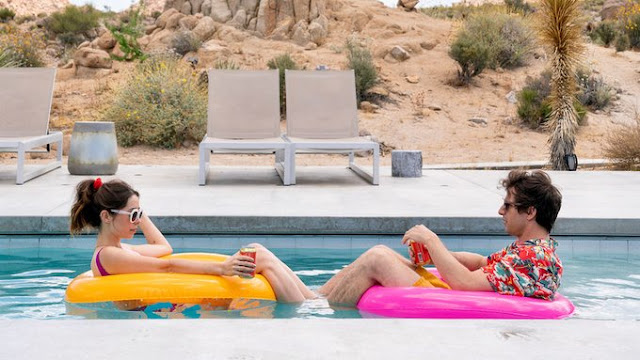 I couldn't help but think, that as they went through living the same day over and over again with only minor tweaks that it was pretty much like living home during this pandemic now. I don't think that when Andy Siara wrote the script or Andy took on this role that they ever thought someone would be watching it with that frame of reference, but oddly enough, there are MANY similarities,. So maybe this movie is deeper than it appears, but deeper due to current circumstances not by design.

There was no explanation whatsoever as to where the mysterious cave time loop came from. And the way they got out of it - or did they? - I don't want to give anything away - of course did not make sense but I appreciated the attempt at some kind of science to make it seem logical.

This movie is not logical. It's funny, it's set in a great location which makes you think summer and fun and makes you just want to veg in a pool in a pizza float- and that is what it set out to be. Pure summer fun. 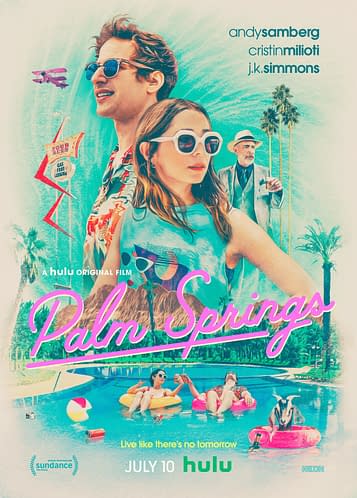 This film was a Sundance Film Festival pick. J.K Simmons and Peter Gallagher are a treat to see in this. Also stars Meredith Hagner as Nyle's self-absorbed girlfriend and Camilla Mendez as the bride that gets married dozens of times.  I read this movie sold for a record price at Sundance - 17.5 million and 69 cents - most likely assuming a theater run. Time will tell if it was worth the price with the drive-in run and streaming, my guess is it will pay off.

Update 7-15- Hulu claims it is it's most successful movie yet.

PS.  Please someone tell me what brand of beer they were drinking.