Review of Shutterflies: Snapshot of a Succesful Student Short Film

Hayes Walsh and Spencer Muhlstock Produce a Riveting Thriller, Smash's Christian Borle and Local Fave Rosie McCooe Star
By Suzanne Ordas Curry
It’s always exciting to see young people following their passion, and when they follow through, and do it right, it’s a sight to behold.

I happen to be speaking to an actor friend of mine, Rosie Gunther McCooe, and she mentioned how she was in a new film by two students at her local high school, called Shutterflies. As with many independent films these days, it was funded through Indiegogo.

The movie was premiering at a local theater in NJ, the gem of smack in the middle of ’s downtown area. I went with my son, who is doing music for another student film in my town along with the two student film makers doing that film. I figured they would want to see what some fellow juniors in another town could do.

It was a freezing cold night in November with barely a soul on the street but inside the lobby it was a whole different world. The excitement there was contagious.

Hayes Walsh and Spencer Muhlstock were the savvy 17-year olds that wrote, directed and produced the short film. Hayes also starred in it and showed that acting is also one of his talents. He was truly believable as the amateur photographer Declan who found himself in the middle of danger, possibly so convincing because as a filmmaker capturing life through a lens is the way he sees and creates his world. In the movie we see the tale told through his eyes, through the lens of his own being. View the trailer here:
https://www.youtube.com/watch?v=BtKUWgS40Gg


The talented twosome was beaming with pride as they chatted with all the guests that came to support their work and cheer them on. They posed for pictures for family and friends and for local press. They also posed for photos with the cast and crew.  Tony-award winning actor Christian
Borle, just off the heels of  starring  Steven Spielbergs's Smash on NBC as Tom Levitt and as Max Detweller in NBC’s Live Version of The Sound of Music was quite a coup to have in a lead role. Quite a heavy hitter for a student film, and the boys were quite happy to have him at their premiere as well.


Christian came to be in the movie because Spencer's dad Jeff was part of the tech crew for NBC and knew Christian from Smash. It says a lot about an actor that he would lend his name to a project with two unknowns, especially two high school juniors. However, these astute young directors gave Christian a chance to play and shine in the role of the unpredictable, colorful, yet dark Lieutenant Burns, whose job was to solve the whodunit. Christian said, "I loved the script. It was very mini QuentinTarantino-ish". For a complete interview with Christian click here: http://www.suzeebehindthescenes.com/2014/05/interview-christian-borle-helps-make.html

Rosie McCooe, who played the female lead, was on the soap One Life To Live as a young actress and has appeared in other local films such as Bad Parents sand the soon to be released Jersey Devil. She played the rough and unappealing though highly-coveted housewife. Anyone that knows Rosie found out what a good actress she was because she is the opposite of this part.

Hayes Walsh played Rosie's son. Rounding out the cast was young Lily Walsh, who learned sign language for the part, and Andrew Greusetskie.

As the movie played in the packed theater, I realized that the best part of the night was watching the reactions of the kids I brought with me. During the whole film they were, literally, on the edge of their seat in the theater. I could tell that they were just not listening and watching the film, but really, really watching it. The ride home was tremendous, they couldn’t stop talking about the sequences, the camera angles used, the foreshadowing,  the stunts – especially the gunshots, the dialogue, the actors, continuity, the props, something about a glass of milk, etc. Theses kids were truly inspired by their peers.

And they should have been. Being one of their first feature-length films, this team of 17 year-olds from created a professional, engaging film with believable dialogue, action and intrigue. If I was flipping through the movie channels on cable I would have stopped to watch it and watched it to the end, not knowing it was from the minds of 16-year old boys. (Production started when they were 16.)

I had seen works by this dynamic duo before, at a Film Festival held at this same theater a year prior and then searching them on Youtube. I was so impressed by their comedic short videos that I had already had my son watch them, so when I asked him if he wanted to go see their new film, I just told him it was the “White Crayon”  kids” and the one with the head in the Christman  box video.

I asked Spencer and Hayes what their inspiration was for doing this particular movie, and as many artists will tell you, it could be a simple, unusual or out-of-place object or idea. Spencer gave credit to an old  camera that was lying around his house. “A large portion of the idea honestly came from the main prop in the film”, he said “ A 1960’s Hasselblad camera. I desperately wanted to use it in a film, for some kind of period piece. “ 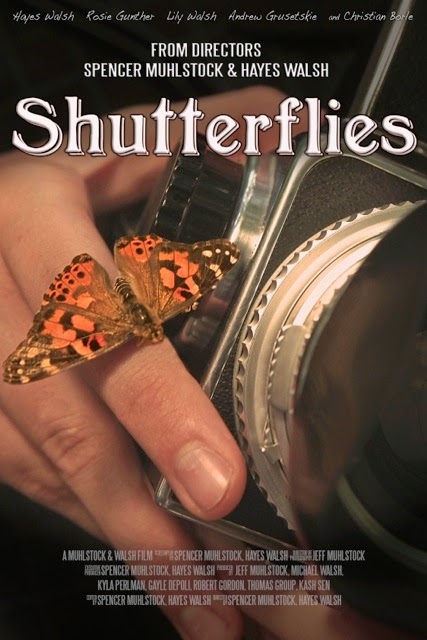 He added, “ Hayes and I always work so collaboratively by bouncing ideas off of each other, so when the idea of a young photographer in the 1960s came up, we soon constructed a complex murder mystery surrounding the main character. The time period intrigued us; there’s a particular filmmaking style/look with period pieces that we became hooked on. When people doubted that we’d be able to pull off a film that took place in the 60s, it just made us want to do it even more.”

Hayes talked about how the challenge is what really got them going. “We were driven to make this film because it was a do-able challenge." He stated, "The story follows a teenager in the 1960’s, which is unlike anything we have done before. Although we were able to create this character, we still needed to make the film realistic to the time period. This challenge was what inspired us the most. “

As I said earlier the movie kept my high schoolers on the edge of their seat, and I had no desire to take my eyes off the screen either. Having five decades of movie watching under my belt, and probably because I like to figure things out, however, I did figure out who the killer was half way through. But the kids I went with didn’t. Whether you know “who did it" and why or not, it’s not all about the mystery but about the way the story is told, It’s about how the plot unravels and thickens, about how the characters interact, it’s about feeling a part of the movie through the eyes of the camera and feeling what the characters feel, it’s about experiencing the  world that the characters live in, in this case a time decades ago, and about the emotions you feel because of the integration of all the elements. This movie is storytelling at it’s finest, and these kids have a very bright future.

For a complete interview with Hayes Walsh and Spencer Muhlstock click here: http://www.suzeebehindthescenes.com/2014/05/shutterflies-movie-interview-with.html

For an interview with the fabulous Christian Borle click here: http://www.suzeebehindthescenes.com/2014/05/interview-christian-borle-helps-make.html