If you've never heard of Shockfest, or if you're already a fan, get ready for the festivities for
this "horrific" festival this year. This year's host, Actress Grace Juliana known this year only as Princess Selena, gives us the scoop on all the fun and fright of the festival. 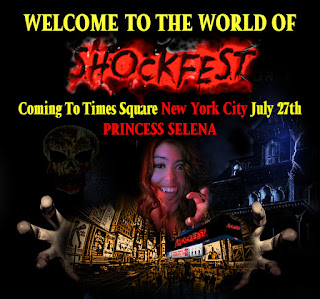 So tell me Princess Selena, what is Shockfest?

Princess Selena: Shockfest is pretty cool. It's the "most CONTROVERSIAL ultimate underground film festival experience, designed to break every convention in the book of the festival circuit and provide the highest value of entertainment, engagement and interactivity for both the filmmaker and the audience member." It's live and and interactive events in three major cities (NY, LA and LV) and designed to highlight and showcase the works of those submit their films and sceenplays even before receive the official selection notice for our main event at the end of the year, SHOCKFEST FILM FESTIVAL. But tune in for our next event on Zoom on July 27th, that I'll be hosting.

Tell me about all about your vampire background.
Princess Selena: I am Princess Selena, a character I conjured up on my own. She is a young princess, but one day her family was slaughtered by vampires aka the FEMVAMPS. I fought them off and one of them bit me, now I am a vampire myself, but I use my family's money and notoriety to travel the world and kill vampires for revenge. Fred, a human vampire hunter, captured me because of my BEAUTY and he wants to kill me or make me her personal slave. I'm hosting the NYC virtual event with the other femvamps, we each have lines and different stories to share with the audience.
How does Shockfest work?

Princess Selena:  Filmmakers submit their films to the shockfest by going on FilmFreeway.com. Usually, there are three events within the year and broadcasted online. This year is the first virtual zoom world. People purchase a ticket and they enter the Zoom experience. It will be a live show on Zoom. Actors will be performing (like myself) and the awards will be given out to the winners.

There will also be a QUARANTINE COMPETITION, it started on March 13th. People submit their horror short film. Grand prize winner wins 666, second winner wins 66.06 and third winner wins 6.66.  I'm not sure how many films are in it so far. They are still accepting admissions and I would tell anyone who has a horror movie to submit it!

I've never heard of Shockfest, but it's been around for awhile, right?

Princess Selena: This is the 12th year Shockfest has been in production. In the past they have given awards to notable directors like Eli Roth, and are currently working with someone who is big in the horror world, BUT IT IS A SECRET!!!! Every year there are film events, the most notable one in LA. The creators rent out a studio and design with tons of horror, blood and freaky decorations. I have never been, but from the photos it looks scary!

Check out the facebook page for tons of pics: https://www.facebook.com/shockfesthorrorfactory.

What was the impetus for this festival?

Princess Selena: It started because Guil just loved horror and he wanted to make an enjoyable experience for independent filmmakers around the world. Sometimes they do get bad publicity because their venues, or movies are a little bit too "out there" but this is not for children! one year there were even dancing naked clowns!!! However, this year the Las Vegas event will be toned down and more family friendly since it will be held at a library. But shockfest rarely does anything small.  November 13 there will hopefully be an in person film festival event in Hollywood. GO BIG OR GO HOME!
What attracted you to this genre?

Princess Selena: Horror is so popular because it can bring oneself into another dimension. You can dress up into something totally scary, put blood on your face, hold a knife and scream all your troubles away! Horror is very interactive and fun in the film making community. Its not boring and it brings excitement. I love horror just because I love the feeling of being scared. I love the fantasy of it all, its not real, but its just fun.

Can I do a shout out? I want to thank Guil Claveria and Matthew Rosvalley for this wonderful opporunity to host. It' smakde my quarantine ten times more fun!

How can we get tickets for the July 27th Shockfest?

Princess Selena: Tickets are available via eventbrite.com. Charge is  $13.00.. https://www.eventbrite.com/e/shockfest-macabre-mansion-tickets-107154586252. You can see it by paying for a ticket and then you will get a zoom link the day of the event to join.