Interview: Brandon Barash of Days and General Hospital Stars in New Short Film on the Reel Woman's Network; Why He Took the Role and How it's so Different from his "Day" Job 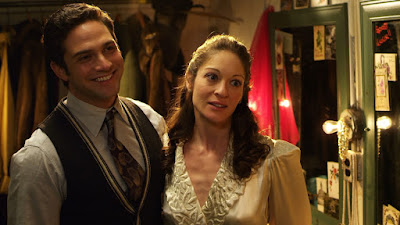 Fan fave Brandon Barash is a busy man. First, in typical but still much beloved Days of our Lives style he returned to Days even though he was killed off (and his heart given to someone else.) That just shows how much the fans wanted him back. In addition to this day job, this single dad is  busy with a multitude of other projects including a role as a handsome young husband in the short film The Mourning Hour, of which he is also a producer. Written by Shevaun Kastl and also starring Shevaun and Robert Knepper, you can see this film now streaming on The Reel Woman's Network. Read on to find out why he took this part, and what he's doing now in his downtime.

Brandon, how did you get this role? Did you know Shevaun?

BRANDON BARASH: Shevaun and I met through a mutual friend. From what I can remember (this was about 10 years ago), she emailed me that she had a script that she had written and wanted me to play one of the parts. At the time I was playing Johnny Zacchara on General Hospital -- the shooting schedule was grueling, so my immediate reaction was to say no.
So you were sold when you read it?

BRANDON BARASH: Then I read the script. It was poignant, and it struck me. I wrote Shevaun right away to tell her that I'd do the film. Then she told me that Robert Knepper was to play my brother, and I was elated. I've been a fan of his for quite some time.

What was your role as associate producer?

BRANDON BARASH: Money. That's it. Since I was on General Hospital at the time, I was able to offer fan experiences in exchange for donations to the film.

Is there anything you researched or something from your past that you used to become this character?

BRANDON BARASH: This was one of those pieces that I used traits and quirks from various family members to imbue the character with. Given the period, old photos of my grandfathers were a big help.

Have you ever done a period role before? I loved the costuming!

BRANDON BARASH: I have, and they're really some of the most fun roles to play. It's one of those things that when you don the period clothes and walk onto the period set, the imagination simply runs wild.

Film is so different than fast-paced daytime. Sonia (Days director) has told me it's done incredibly fast. What was your experience?

BRANDON BARASH: Films are meticulous, whereas there's just not time for that in the soap world. In daytime, we need to have one show for each weekday of the year, so we shoot on average from 80-150+ pages per day. That's the length of a feature film. In film and TV, we generally film 6-8 pages a day. This allows for a deep dive into the characters and the world in which we're creating.

Are there any particular memories of the shoot that stand out from this film? You were able to shoot at the Al. Ringling Theatre. That must have been an amazing location.

BRANDON BARASH: Yes, the Ringling Theater was magical. And it was in the dead of winter, so it was frigid inside! I remember being wowed by the sweeping, snow-blanketed landscape outside. I enjoyed exploring out there in between takes.

I know you probably can't tell us, but can you give a hint as to whether or not you are back on DAYS for awhile?

BRANDON BARASH: What I can tell you is that you'll see a lot of Jake in the near future. I don't know much about the fan reactions, save for what people write to me on Twitter...I stay away from all message boards, etc., as it just doesn't serve me creatively.

Fans were so happy you were back, in true Days of Our Lives style. How did you feel when you got the call that you were returning?

BRANDON BARASH: As far as when I had the call to discuss a return, and they pitched Jake to me...I was sold. They provided great bones for the character, then they really let me sink my proverbial teeth into the role and add my own twist.

Tell me about the Fathership and what else you're doing now.

BRANDON BARASH: The Fathership is going really well. We've taken a little break from creating video content for the moment, because we're working on something really exciting.

You've got me curious about what it is, but I guess we will all wait. So in your spare time, what are some of the shows you are watching or binging on now?

To View The Mourning Hour on the Reel Women's Network: