Review of Spike Lee's Da 5 Bloods On Netflix: Lee's Mastery of the Medium, Multiple Genres and Storytelling Presents a Complex and Compelling Need for Change 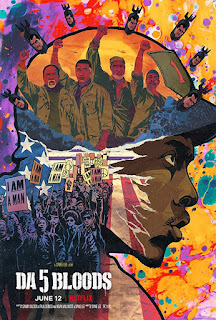 Editor's Note: Ashton is not just an avid film fan but is also a high school student. His review provides hope that change will come from the young people.

“We’ve been dying for this country from the very get, hoping one day, they’ll give us their rightful place. All they give us is a foot up our black asses.”
-Stormin’ Norman
Ever since he thundered onto the scene in 1986 with his controversial debut about a woman who dates three men at once, called She’s Gotta Have It, Spike Lee has been one of the most influential filmmakers of his generation. At 63, Lee has accomplished a great deal, directing over thirty projects, including documentaries, TV shows and most importantly, twenty-seven feature films; among the most noteworthy, Do the Right Thing, Blackkklansman and Malcolm X.

In addition to the impressive list of films he’s made, Lee is perhaps best known for the sense of timeliness and urgency which permeates throughout his films in addressing social injustice. Do The Right Thing, a film that is still unfortunately relevant today was written by Lee specifically in response to an incident of police brutality in 1983 regarding the death of Michael Stewart. Malcolm X was always a passion project for Lee and became even more timely as it happened to be released in 1992 right after the LA riots surrounding the acquittal of the police officers in the Rodney King case. Finally, the Charlottesville, Virginia riots took place right before Blackkklansman commenced filming and was included at the denouement because it was considered by Lee and producer Raymond Mansfield to be the moment that “ties the entire movie together in the most profound and emotionally effective way.”

In the case of Da 5 Bloods, Lee’s sense of timeliness is extraordinarily and almost prophetically placed. Although he had already completed work on Da 5 Bloods when the murder of George Floyd occurred, the film was delayed until June 12 because of Covid-19. The release ended up being a mere eighteen days after Floyd’s death. One cannot help but feel that the delay was a miracle because it ended up becoming a direct response to this and a summation of themes that Lee has worked with his whole career.

The movie itself can be considered all the more impressive because it is proof of just how important the film industry can be in discussing our society's past, present and future. Cinema can often work as a vehicle for social commentary and also be used to effectuate necessary change, if done successfully.

At two hours and thirty-four minutes, Da 5 Bloods may feel slightly disjointed and overlong at times. There are arguably too many storylines for all to be fully addressed and a few scenes seem jumbled and without clear intention. Throughout the runtime, Lee weaves together a dizzying amount of genres that can be characterized as a buddy movie, a history lesson, an action adventure thriller and war drama, among others. Yet in between all of these, he expertly manages to bring to light his political and social commentary. It is a great example of cinema that can hopefully help to bring about true change in the future. With that in mind, let's talk about the plot and the principle message of the film. 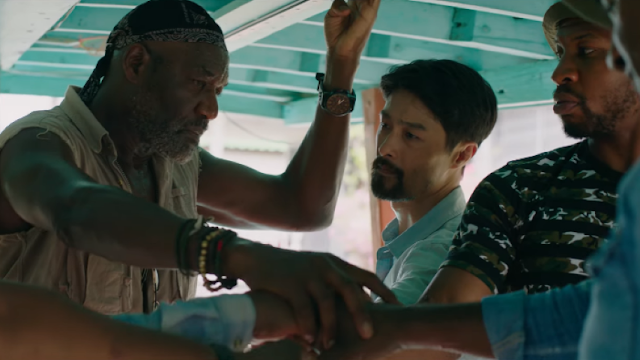 The story revolves around four black Vietnam veterans who return to search for the remains of their dead squad leader, Stormin’ Norman, and the gold that they buried on the battlefield during the war. Along the way, they are forced to confront their painful past and their devastation over fighting in a war for a country that refused to treat them as rightful citizens. We, as an audience also have to confront what they went through to fight for their country only to return home without receiving the recognition that they deserved.

Instead, those who fought for democracy and survived the war are watching their children and grandchildren continue to suffer from the same racial prejudice and inequality ceaselessly and that is the exact point that Lee is trying to make. From Crispus Atticus, who fought and died for us during The Revolutionary War, to the blacks who died in The Vietnam War and into the present day, so many injustices have been perpetuated upon the great black men and women who served our country and their descendants. The ultimate message of Da 5 Bloods is that history is doomed to repeat itself unless we realize that to love one another is what we need to heal as a nation.
If You Like This Article Please Like Us on Facebook for More:
https://www.facebook.com/BehindtheScenezz/
There are multiple aspects of the film that help to convey Lee’s main message, such as the wonderfully expressive music by Marvin Gaye and outstanding performances from the whole cast, but specifically Delroy Lindo and Chadwick Boseman. These two men give towering performances, the best of the year and one of the greatest from “A Spike Lee Joint".

There is a pivotal scene towards the end of the film where Lindo has a vision of Stormin’ Norman, who forgives him for accidentally shooting him during the war and powerfully communicates the need for love and forgiveness. Immediately after that, Paul is taken hostage and forced to dig his own grave. While doing so, he sings Gaye’s God is My Friend, reinforcing the message of love and forgiveness, even though he is about to be executed. 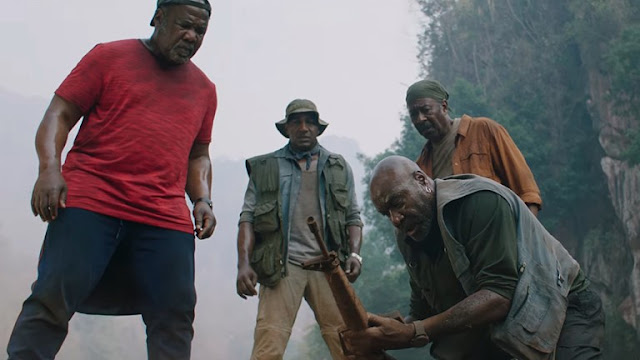 The film ends on a high note with a donation of the gold that was retrieved by the men to Black Lives Matter and other groups that will promote racial justice and equality. In the final shot, we hear Martin Luther King quoting Langston Hughes' famous poem, “O yes, I say it plain. America never was America to me and yet I swear this oath, America will be.”
It is clear as day that the great injustices that people of color have had to contend with throughout history is as palpable as it's ever been. In our nation, there is a sense of outrage and fury that after so many years of prejudice, history seems destined to keep repeating itself in the most vile and unimaginable ways possible.
More from Ashton:
https://www.suzeebehindthescenes.com/2020/05/four-classic-movies-by-top-directors-to.html

Lee has always brought a fierce energy to his films, particularly in Do The Right Thing, which includes some of his most ferocious characters, but Da 5 Bloods is the director himself at his most thrillingly unrestrained over the injustices that continue. He is enraged that after all of this time, our black and brown brothers and sisters are still being mistreated. In spite of this, he has recently gone on record stating that he wholeheartedly believes that the peaceful protests that are taking place around the world and the indignation that has stemmed from the death of George Floyd might just finally create some permanent solutions to the issues that have been plaguing our nation since it's commencement. He also has faith that sometime soon we will be living in a vastly different world and one that is safer for black and brown brothers and sisters. Only time will tell, with love…