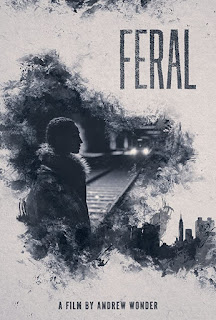 
The film by Andrew Wonder, Feral (2019 now on Amazon Prime), is aptly named. Simply put, Feral is the story of a young homeless woman in New York City. We see Yazmine (played superbly and adeptly by Annapurna Sriram), slinking around the subterranean world of New York City that she inhabits, climbing on piles of rocks with ease, slinking through the tunnels and foraging for food... just as a cat would.
At the beginning of the movie we get a hint as to why she is homeless, but later on we get a hint that that that assumption may not be the correct one. I say this is important, because when we see homeless people, often our thoughts are "why?" This movie delves into the subjects of homelessness, despair, hope and acceptance.
Yazmine has a lot of faces in this film. She carefully chooses who she wants to be before she goes above ground. She can put herself together to look like any normal hipster in NYC looking to have some fun. She dons wigs and does her makeup to give herself a particular persona. One can think that perhaps this is because she really does not know who she is, she can't face who she really is so she becomes someone else, or because she knows how to adapt and becomes what she needs to survive.
Whatever the reason, her many personas are integral to the movie. Being in NYC frequently, I do not think most homeless people have the ability to change their looks or even have enough makeup to do so, but the change of looks introduces chapters and opportunities in her life as we see what she has to deal with on a daily basis. This movie turns a terribly depressing subject into a piece of narrative fiction tha makes you want to keep watching and also educates at the same time. As fiction, it would most likely bring in more viewers than had it been a documentary.

The film covers many different problems in cities in America; the plight of the homeless being the number one issue. However, homelessness does not have one root and hence the film touches issues of  immigration, the role of the government, bullying and many other systemic and almost unsolvable problems. I can't say that this film depicts the true gritty nature of being homeless in a big city - as Yasmine is quite easy on the eyes even in her worst moment and seeing a homeless person is nothing like being in the presence of one - but it gives the viewer a compelling and thought-provoking glimpse as to what homeless people have to deal with on a daily basis through the eyes of one determined yet deeply troubled and downtrodden  young lady.

Through some of the camera shots we see other homeless people talking on screen. It is shown later in the movie that this is because there are people at a homeless shelter making a film and interviewing other homeless poeple. However, Yazmine is the center of this movie. I do not think it would have had the same effect had the lead been a man or if it had shown the lives of others; this allows the movie to delve deep into one psyche. As one of Annapurna's first big roles, she carries this movie. Her debut as a leading lady is worthy or applause. She plays the many different characters with ease and believability.
This movie kept me watching to the end. Did I have questions, like why doesn't she carry the money around with her, has she sought help, is she mentally ill, etc?  Yes,  but overall, I enjoyed this movie for what is set out to be, a movie to make you think, to make  you empathize with a young girl dealing with the unfortunate hand of cards that life has dealt her. And during this pandemic, I can't help but think how much worse it is.
We are rooting for Yazmine the whole time. We want her to survive. In the end, she does - just perhaps not like we had hoped for. A feral cat is not at home in a small NYC condo.