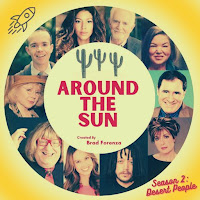 Around the Sun—the hit, scripted podcast series starring iconic talent from stage and screen—wrapped its second season of radio plays with a special episode January 2023 that starred Three-time Oscar nominee Piper Laurie (The Hustler, Carrie, Children of a Lesser God) and series creator Brad Forenza. Also starring in Season 2, with the completed season available now wherever you listen to podcasts are:  Richard Kind (The Watcher), Caroline Aaron (The Marvelous Mrs. Maisel,  Adassa ( Encanto), Mindy Cohn (The Facts of Life),Richard Kline (Three’s Company) Jennie Kwan (California Dreams, Avatar, The Last Airbender), Taylor Purdee (Killian and the Comeback Kids) and Bruce Vilanch (Get Bruce). Listen to all episodes here or wherever you listen to podcasts.
Around the Sun is a series of stories, each episode loosely related and with a common theme. Each original story averages 10 minutes. You'll hear stories about love, relationships, unrequited love, coming of age, identity, retirement, life choices, sustainability, and even a few aliens. You can find it here and just about wherever you stream podcasts. It's the perfect series to listen to in the car, on a walk, in the gym or just to escape for a few minutes.
Around the Sun is a Best Version of Yourself Production, co-produced by Suzanne Ordas Curry (A Case of Blue), and presented by the Broadway Podcast Network. Shane Curry  and Libby Kallins (both of  Libby Jade) contributed the theme music.
Brad Forenza states, “It was an honor to work with Ms. Laurie in the season finale and with every talented performer who leant their time and talents to both seasons of Around the Sun. Something uniquely awesome about Season 2 is that most of its stars appear in multiple roles across several episodes and genres. So, in that sense, this year really felt like ‘radio play repertoire,’ which our listeners love.”
The episodes were produced remotely, which created a unique and smooth experience for the voice talent. “Working with Brad Forenza was such a fun experience." said musical artist Adassa (Ecanto). "In Around the Sun, I was able to engage in a real life situation with all of the enthusiasm and drama that plagues so many of us on a daily basis.”
Emmy nominee, Mindy Cohn (The Facts of Life), reflected in an interview for SuzeeBehindTheScenes.com about her role. She said, "There is something so magical about storytelling… I was absolutely tickled to be part of the record session and connect to new creators of wonderful content."
To read Mindy's full interview visit:
https://www.suzeebehindthescenes.com/2022/11/interview-five-questions-for-actress.html

Drama Desk Winner Richard Kind (The Watcher) commented, "I had such a fun time recording this. The writing is so good, and the characters so clearly drawn.”   Jennie Kwan (California Dreams, Avatar: The Last Air Bender) stated in a forthcoming interview for The LIBBY Show that “Brad is a really well-seasoned writer.”
Singer/Songwriter/Actor Taylor Purdee, in his interview on The Neil Haley Show, stated,  “One of the things that Brad’s done that’s so interesting is the way… the mystery unravels only through the dialog,”
Emmy-Winner Bruce Vilanch said in an interview on Amber Live!  that, “It’s a great project! It’s unusual, off-the-wall radio plays, which you don’t hear about anymore. It’s a perfect idea.”

Around the Sun is a Best Version of Yourself Production, co-produced by NJ producer Suzanne Ordas Curry (Equity, A Case of Blue), and presented by the Broadway Podcast Network.
Suzanne Ordas Curry added, "In today's busy and stressful world, Around the Sun is a perfect escape and distraction. Brad's stories involve you from the start and leave you thinking. I also want to thank all the top-notch actors that are a part of this, bringing his words to life." Both seasons of Around the Sun are available wherever you listen to podcasts. Learn more at: AroundTheSunPodcast.com.
Email ThisBlogThis!Share to TwitterShare to FacebookShare to Pinterest
Newer Post Older Post Home