Feel-Good Interview: Actor, Musician Eric Martsolf of Days of Our Lives - Now on Peacock, Passions and More Tells us Six Things To Know About Him 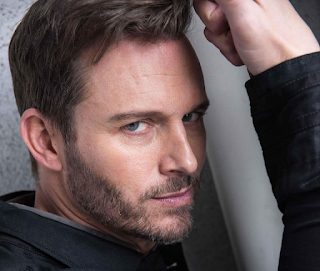 By Markos Papadatos, "Powerjournalist"
Daytime-Emmy Winner Eric Martsolf is known for playing Brady Black on Days of Our Lives, and for playing Ethan Winthrop on the 2000s daytime drama Passions. You may have also seen him in The Bay, Venice The Series, Smallville, Extant and other shows. He's also in and a producer of a yet-to-be released short film called Insane. (Editor's note- it's really good, so compelling,)
Eric has also done numerous stage productions but his talent doesn't stop with acting. He has been touring with the Day Players Band, which is also comprised of Wally Kurth, Brandon Barash, and Carson Boatman.
What Eric Martsolf Watches
His favorite movies include Top Gun: Maverick and the new Elvis movie. "Maverick was so nostalgic," he admitted. "I've played Elvis for many years, so Elvis has a special place in my heart."
He and his wife, Lisa, enjoy binge-watching Lucifer, Game of Thrones, and The House of the Dragon. "There is a lot of great content out there, and I don't have enough hours in the day to watch all that," he said. "I will encourage people to go out and get Peacock if they haven't done so already so that they can watch our show on there. Peacock is adding so much to their inventory, there is going to be a deep bucket of content. It is going to be completely worth it."
His Favorite Cheat Foods
Martsolf revealed that his favorite cheat meal is a "giant steak." "I love a giant juicy steak more than anything in the world," he admitted. "Also, pizza is a given."
On How He Lives His Life
His favorite mottos to live by is: "if it feels good, then do it" and "trust your gut, it rarely lies to you." "My first instinct is usually correct in most of my decision-making," he said.
Martsolf noted that he wants to be remembered as someone that did what he loved to do for a living, which is entertaining people, and also raising two beautiful kids while doing that.
He share that he redefined his definition of the word success. "Success is now being employed in this tough little world that we are in," Martsolf said. "The more I live life, the better actor I become."
VISIT ERIC MARTSOLF AT:
https://www.ericmartsolf.com/
Photo Credit Top of Article: Levi Walker
Email ThisBlogThis!Share to TwitterShare to FacebookShare to Pinterest
Older Post Home