Feel-Good Interview Series - Actor and Model Zane Holtz of Hallmark, Katy Keene and More - Six Things to Know About Him 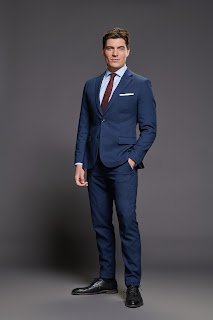 By Markos Papadatos, "Powerjournalist"
You may know the talented actor and model Zane Holtz from his role as KO Kelly on the CW's Katy Keene and Riverdale. But he has numerous roles on other series and films such as NCIS, All Rise, From Dusk to Dawn - The Series where he played Richie Gecko.
This native of Vancouver, Canada starred in his first original Hallmark film Twas the Night Before Christmas opposite Torrey DeVitto in 2022. (Editor's note - this is a must-see movie... bringing together history and literature with a Christmas theme.)
What Zane Holtz Watches
Holtz's favorite series to binge-watch is Mayor of Kingstown. "I actually watched that while I was in production for Twas the Night Before Christmas. That was the last one I watched and I really enjoyed it," he said.
Speaking of Christmas movies, Zane said that his favorite holiday movies are
How the Grinch Stole Christmas with Jim Carrey, Love Actually, Christmas Vacation, and Elf. Love Actually is my favorite Christmas rom-com," he said.
How He Destresses
In an effort to unwind and relax, he does "a lot of exercising, and jiu-jitsu." "My release has always been jiu-jitsu, and I will be doing a lot more of that in the future. Its training has mental and physical benefits," he said.
His favorite mottos to live by is the Golden rule. "Do unto others as you would like them to do to you," he said.
His Cheat Food that's Actually Healthy
Holtz really enjoys "dark chocolate" as his cheat meal and he noted that he eats it quite regardly. "It's not even a cheat meal for me at this point," he admitted. "It's almost a part of my regular diet. I also do love a New York pizza."
On Future Work
On his dream acting partners, Holtz said, "I try not to limit or focus too on that. I am always open to working with whoever. I am just focused in finding the best characters and the best stories."
To learn more about Zane Holtz, follow him on Instagram.
Photo Credit: Steve Wilkie, Hallmark Media
Email ThisBlogThis!Share to TwitterShare to FacebookShare to Pinterest
Newer Post Older Post Home