The successful and growing Ridgewood Guild International Film Festival is entering its 12th year with a live, in - person festival for 2023.  This year the festival will again be presented in-person with film screenings in downtown Ridgewood at the Ridgewood Bow Tie Cinema Warner Quad, 190  East Ridgewood Ave, Ridgewood NJ (and other venues TBD) April 26th and April 27th 2023. Opening Night Red Carpet on the 26th, Red Carpet on the 27th and Closing Night Party on the 27th.
In 2021 the festival was virtual for the first time due to the pandemic and included 80 films and interviews with several filmmakers. With a healthier forecast in 2022, The Guild presented its film festival live and in-person once again at the classic art deco Ridgewood Bow Tie Cinema Warner Quad and the Ridgewood Library.
The film festival is very filmmaker friendly and is a Gold Star Festival on Film Freeway, With it's proximity to New York City as well as train station which is in walking distance, you never know who you will come across. Producers, actors and other industry people have attended. The list of stars who have graced the Red Carpet over the past few years include Eric Roberts, Alysia Reiner, David Alan Basche, Torrei Hart, David Krumholtz, Constantine Mouralis, the late Danny Aiello, various stars of daytime and many more.
In 2021 the festival upped it's game and provided FREE in person and virtual panels, interviews and events for filmmakers, where networking between experienced and new filmmakers and actors was encouraged and accessible.
All About the BIZ - FREE Panel with Emmy-winning and Nominated Producers and Actors.. including David Krumholtz (Bernard the Elf).
View on Youtube Here.
Movies shown at the festival include independent films, documentaries, foreign-language films, student shorts, and music videos by local and regional filmmakers as well as those abroad. For updated information visit https://ridgewoodguildfilmfest.com/
Submissions Open Now Through Film Freeway
Submissions are now being accepted through Film Freeway here.
Standard Deadline: February 21, 2023
Last Entry Deadline: March18, 2023
Please visit the site for all the categories specifics. Categories include Feature, Documentary, Short, Animation, Web/New Media, Music Video, Experimental, Student (Elementary, Middle, HS), Student (Undergrad only) and International. 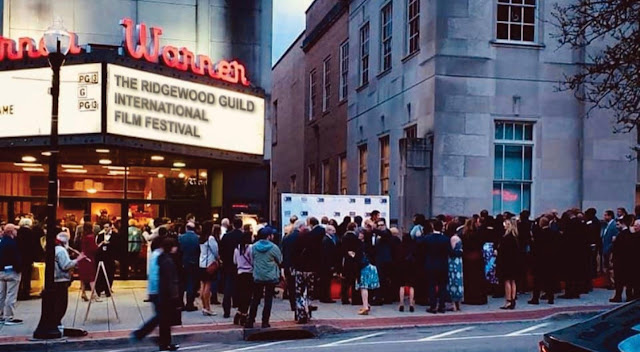 Glam it Up at "Evening with Oscar" Fundraiser Party March 10th
The Ridgewood Guild International Film Festival is holding it's annual "An Evening with Oscar®" party on Friday, March 10th at Park West Loft, 38 Oak Street in Ridgewood from 8:00pm – 12 midnight. This fun event is open to the public and is filled with excitement, dancing, movie trivia, and fine food and drink.
Rub elbows with fellow movie lovers and some people in the film business. Guests also get to walk the "Red Carpet" and pose for photos. There will also be a DJ, dancing and a trivia and a best-dressed contest with some great prizes from local businesses. You can dress formally or in costume as your favorite Oscar-nominated character, past or present.
The cost is $75 per person, which includes a four-hour open bar, passed hors d'oeuvres, pasta station, salad and dessert. [Venmo: @RidgewoodGuild] Event chairperson Jim Suozzo says, "You'll have a good time and meet people you may not have met otherwise. Most importantly, you will be supporting the arts in this community."
The party is a fundraiser for the festival which awards prizes in several genres of film and also gives $500 scholarships to the directors of the two best films by students, funded by the Guild’s Gold Sponsors – TEEEM, Park West Tavern, and Coldwell Banker Realty. Film Festival sponsors to date are Park West Tavern, Coldwell Banker Realty, and Greater Alliance Credit Union. Sponsorships and ads in the Film Festival Journal are available by contacting RidgewoodGuildNJ@gmail.com.
This event sells out so please reserve a ticket early.
FOR INFORMATION AND UPDATES VISIT:
https://ridgewoodguildfilmfest.com/
Email ThisBlogThis!Share to TwitterShare to FacebookShare to Pinterest
Newer Post Older Post Home