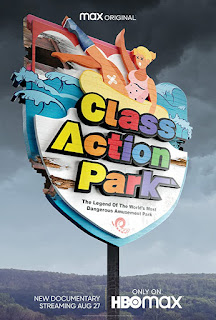 If you lived in NJ, or anywhere near in the 80's, you went to Action Park. Or as we called it in Jersey, Traction Park.

You just went. it was cool to go. It was a rite of passage. Little did we know what was really going on behind the scenes. I mean, I got some stories from my cousin who was a lifeguard at the wave pool, but it was more about the cool jewelry she would find at the bottom. And everyone had their own stories as well.
The last time I went I was in college, I went with my boyfriend now husband and three other friends. I remember coming off an attraction and seeing a line of blood down my thigh. I remember saying, "Something was scratching me me whole time."
The other friend of ours, well, he had his glasses stolen that were hidden in his sneakers in a locker. I am sure they were after the sneakers, but they should have left his glasses. They were really expensive back then. Plus, his girlfriend had to drive all the way home to Pennsylvania because he couldn't see. It was a stick shift and she had never driven one before so that must have been quite the nervewracking ride home. Indeed, the story of Action Park indeed takes many winding paths, which are coming to light now.
Getting back to my injury, after seeing Class Action Park on HBO Max, I can't for the life of me remember what ride I went on. I am not a thrills person at all, even the Teacup rides get me dizzy. So I guess it was the energy and fervor in the testosterone-filled park that got me to go on a ride I know I would never go on now, especially after seeing the documentary. My son also went several years ago. Of course he never told me, but he complained about the ice cold water he landed in, how his friends goaded him to take some jumps his brain was telling him not to, and how on one attraction where there was supposed to be a drop, it didn't drop when it was supposed to.
The documentary Class Action Lawsuit by Chris Charles Scott and Seth Porges                  is worth watching. If you went there you'll find it absolutely fascinating, if you didn't, you'll really find it fascinating that something like this ever existed and that thousands and thousands of people went to it. That jingle was really, really catchy.
View trailer below or here:
https://www.youtube.com/watch?v=mqg48h_uKYM
It's quite well-done. Keep in mind that  that there were no cell phones or small video cameras back then, so most of the actual footage is grainy VHS. There are some shots of kids partying; I kept picturing a nerdy Adam Goldberg hoisting his mom's ten pound video camera on his shoulder to get some footage of a party that no one would every believe he was at.
So, to make up for the grainy footage the documentary uses animation and interviews. The animation is clever, humorous and informative. It was used to show the layout of the park and re-enact some of the encouters between staff employees, management and the public. I watched it thinking that I had no idea how may rides were there, or just how big and dangerous they were.
There's one loop-de-lopp ride, that's the best I can describe it, it's  like my son's Hot Wheel's track. And when my son played with that track as a kid the tiny cars never made it around that loop-de-loop safely. And so it goes with the humans. Spoiler alert- missing teeth can scar.  Another spoiler alert - there were snakes in the lake.
The interviews were well-done, some were lenghthy but still kept my interest. Collectively they gave a particular, damning picture of what Eugene Mulvihill was like, what working there was like and how there seemed to be no regard for safety but just for reckless fun.
In fairness the filmmakers did not intervew anyone that had an opposing view, but facts seem to speak for themselves. And the fact that six people died there, that he fought these death lawsuits tooth and nail in court, and that the park continued to operate with seemingly no alterations or corrections so that it would never happen again, makes me think that this documentary may have captured  the essence of the man that built it - and those that enabled him. It was heartwrenching to hear the words of a mother who lost her son, you could feel the anger that was still there.
With just a few of the same attractions, it's a different park now called Mountain Creek Water Park. And the teenagers are back.
For more info:
https://www.classactionpark.com/
Email ThisBlogThis!Share to TwitterShare to FacebookShare to Pinterest
Newer Post Older Post Home