A Case of Blue, a film by Dana Glazer is an official selection and will screen at the 2020 Imagine This International Women's Film Festival from September 24th-October 4th. There will be a  Live Director Q & A with Dana Glazer, who wrote and directed the film.There will also be a Q & A with the film's co-producers on September 30, 2020, Suzanne Ordas Curry and Dottie Fucito. Scott Rosenfelt (Home Alone, Mystic Pizza, Teen Wolf) is Executive Producer.

The Imagine This International Women's Film Festival selects films for their message and quality as well as because of the women working on the film. Co-Producer Suzanne Ordas Curry (Equity, Killian & the Comeback Kids) states, "We are very happy to be recognized for the female aspects of this film in front of and behind the camera. Though our lead character is a male, his life is shaped by the females he brings into his life. Also, our crew was over 50% female!" 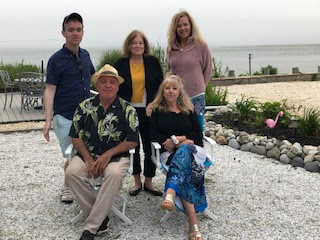 Seated: Executive Producer Scott Rosenfelt and Co-ProducerSuzanne Ordas Curry,
Actor Brad Forenza, Co-Producer Dottie Fucito and Actor Rosie McCoe
The movie is a drama about retiree Richard, played by Stephen Schnetzer (Another World, Broadway) who seeks to find meaning and new direction in his life. By chance he runs into Amelia, played by Annapurna Sriram (Feral) who brings him back to the young, carefree days of his youth.
Because the film festival is virtual, viewers can watch the movie from the comfort of their own homes.

To find out how to view it and purchase tickets, visit:

You May Like This Interview with the Festival Founder:
https://www.suzeebehindthescenes.com/2020/09/interview-with-filmmaker-patrice.html

For more on A Case of Blue Movie: