NYC MCC THEATER'S PRODUCTION OF MISCAST 2020: Delightfully Funny, Poignant and a Reminder of Why We Love Theater

When you think of a musical theatre fundraising event, your first thought is not typically of a grown man (Joshua Henry) singing “Tomorrow” from Annie, or a young woman (Bernie Feldstein) singing Fiero’s “Dancing Through Life” from Wicked, featuring guest appearances from Kristin Chenoweth and her pug, but with Miscast 2020 at MCC Theatre, that is just what you’re going to get. The Youtube-based event held on September 13 2020, 7 months into the pandemic and reminded us of why we all love the NYC Theater world so much, and how we can't wait for it to come back. Which it will.

The event raised money for the MCC Theater's mission, it's youth Company and the Mental Health Coalition, founded by Kenneth Cole. Almost 60K was raised in one night with almost 70K viewers.

Typically one of the most highly anticipated musical theatre comedy events of the year, 2020 was not to be outdone, thrice delaying and finally moving the event to a virtual live stream. Heather Headley, one of the evening’s performers, mentioned in a New York Times interview prior to the live stream that she hoped the performance would serve as “a balm”, and hopes after being born out of a virus and unrest, it will bring joy. And that it did.

Despite the limitations of the platform, the event brought theater to life again. Any time you take live performance out of a live space, there is something to be missed. The preshow event began at 7:45 where we were met with past Miscast performers including Jeremy Jordan, Kelli O’Hara, Aaron Tveit and more. The sense of nostalgia was thick in the air as we were then met with co-artistic director Bernie Telsey, alone in an empty theatre. He took a moment to acknowledge the unusual circumstances and current cultural climate, setting the tone for a very different show than years prior.

But, in the spirit of theatre being a naturally adaptable platform, the show indeed went on. We experienced performances of vastly different tones, from Ingrid Michaelson and Laura Ridloff’s moving performance of “You Will Be Found” in both English and ASL, to Rob McClure’s one-shot self-filmed performance of Sweeney Todd’s “Worst Pies in London”, where the audience had the unique privilege of experiencing the number from the perspective of the fly. (Also, shout out to Rob for his commitment to the role, opening and consuming a bite of cat food for our viewing pleasure and horror.)

There were some stand-out ballads throughout the evening, each taking on a very different tone despite their similar videography. In their defense, there are not many options of camera placement for single performers quarantined alone in their small city apartments. Phillipa Sue enchanted us with a simple rendition of “Some Enchanted Evening” from South Pacific, while Norbert Leo Butts entertained us (for his fifth time at MCC’s Miscast, a fact he shared in his hilarious introductory outtakes) with a rock and roll rendition of “I Don’t Know How to Love Him” from Jesus Christ Superstar. Acknowledgement also needs to be given to the at-home camera crews consisting of family members that had no idea they were accidentally going to become overnight entertainment producers. Robert Fairchild’s cell phone monologue prior to his rooftop dance solo in “If My Friends Could See Me Now” from Sweet Charity left many of us theatrical-type nodding “same” when he answered the call to join Miscast with a “you got a job for me, or what?” to Bernie. 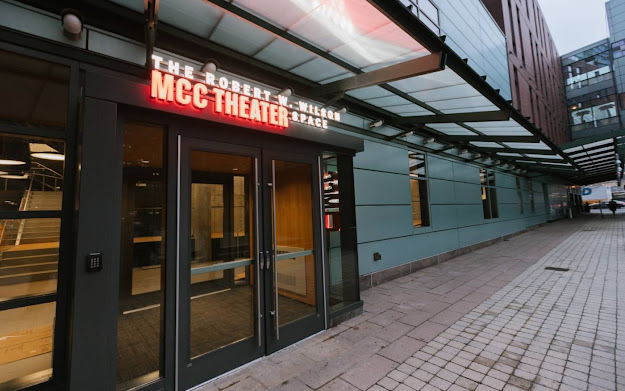 Leslie Odom Jr. and wife Nicolette Robinson, a power couple in the Broadway scene, were not to be outdone giving us a lovely rendition of “Part of the Human Heart” from Once on This Island, albeit slightly odd as they are married yet filmed in two separate locations. A missed opportunity to safely show some physical and emotional connection, a thing theatregoers are craving most of all right now.

Watch it here for free until 9-18-2020:
Not to be missed were Adrienne Warren singing a powerhouse version of “Before the Parade Passes By” from Hello Dolly, arguably not “miscast” as many hope she will play the role herself in ten to twenty years, and Isaac Powell’s more upbeat “On My Own” from the classic Les Mis, adding some life to a traditionally slower song. Rounding out the evening was an otherworldly finale from Heather Headley singing “Endless Night”, from The Lion King, which was both uplifting and incredibly poignant, reminding us that although theatre can be an incredibly hopeful place, there is still much to do outside our four walls - now computer screen.
The evening’s goal was to provide an entertaining means of escaping the difficulties of everyday life, even just for a moment, and it did just that. From a classic zoom-call opening group number to Headley’s mighty and compelling closing, we got a glimpse at what theatre has always been known to be, not just entertaining comedy but a method to create change and instill purpose on the average viewer.

TO DONATE AND TO WATCH:

ABOUT MCC MISCAST 2020: The money raised through Miscast20 will provide vital support to MCC Theater and their mission to develop and produce exciting work Off-Broadway, as well as its Youth Company and partnerships with New York City public high schools, and MCC’s literary development work with emerging playwrights. MCC will donate 10 percent of gifts made during the broadcast to the MENTAL HEALTH COALITION — a new initiative founded by social activist and fashion designer KENNETH COLE to end the devastating stigma surrounding one of today’s most prevalent public health crises.

About the writer: Allyson Schiller is our newest writer. With a background in theater, she's anxious to be back managing a stage in the near future.