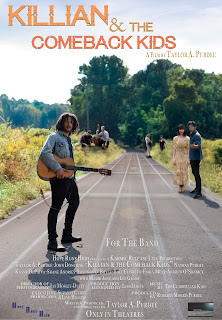 The indie-rock film Killian & the Comeback Kids is coming soon to a theater near you, as they used to say -yet this has so much more meaning now. If you're in an area where theaters are open, you may find Killian and the Comeback Kids making a stop at your local theater.

Killian & the Comeback kids is a feel good, summer breezin' musical movie about a multi-racial young man named Killian, who comes back to his depressed home town after college and tries to make something of himself, and do something for the town. Given what's going on in the world today, it's a relevant film touching on important issues many young people have to deal with. But it's easy to watch, and spoiler alert- it's got a  happy ending. And it's filmed in the beautiful countryside. When you see a shooting star go across the screen, realize it's a real shooting star.

Taylor A. Purdee wrote, directed and stars in the music. He also co-wrote a lot of the music for the film. In the movie, his dad is played by his real dad, Nathan Purdee, who in real life is a prominent soap actor and who was nominated for an NAACP Image Award. His mom is played by Kassie DePaiva, a  4-time Daytime Emmy-nominated fave among soap opera fans.

Review of Killian & the Comeback Kids:

The movie is being distributed by Hope Runs High Films. When possible members of the cast will attend screenings to play or for special panel discussions. For updates on when and where you can see this film, visit: https://www.killianandthecomebackkidsmovie.com/