Katonah Classic Stage Film Festival Held as Drive-In: Filmmakers Young and Older From Around the World Present Different Views of our Changing World - Now Set for 8-31 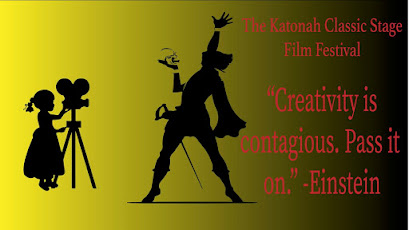 The show must go on! The new local theater for classics Katonah Classic Stage in Katonah, NY (outside NYC ) is presenting its first Film Festival on Friday, August 28, at 8:00pm. This film festival will be shown in in a Drive-in set-up at the Bedford Playhouse in Bedford, NY at 8:30pm. Tickets are available on the website. UPDATE: Due to weather conditions, the festival will be held the same time but on August 31, 2020.

Though Katonah Classic Stage's mission is to present in-person productions of Shakespeare and other classics, because of the pandemic founder actor/director Trent Dawson and his team had to think out of the box. Hence, the KCS Film Festival was born.

KCS received hundreds of entries from all over the world. Entrants were asked to provide films that either featured the classics, were local, or were very DIY. Many of the films, no suprise  had to do with the pandemic. Aside from those related to the classics, they received many films touching upon other issues the world is currently facing.  There were three age divisions as youth were encouraged to participate.

Here is a listing of those that were accepted. For more details on each film and Katonah Classic Stage please visit: https://www.katonahclassicstage.com/

First Day of a Chick

Amity and Miriam: A Quarantine Special

Meanwhile in Another Part of the Forrest