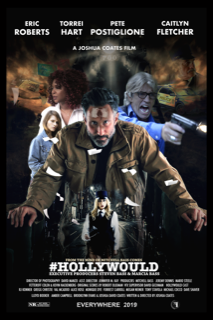 Tickets are on sale now for the special Eric Roberts Meet and Greet at the Ridgewood Guild International Film Festival in Ridgewood, NJ on April 25th. This Academy Award and Golden Globe - nominated actor will be on the Red Carpet for the premiere of his new movie, the Joshua Coates film entitled Hollywould.

The evening starts at 6pm with the Red Carpet. Eric and his fellow cast will be there as well as filmmakers, cast and crew from the other films at the festival playing that evening. The Red Carpet is a free event and will be held outside the Bow Tie Theater on Ridgewood Avenue.


For the $30 package ticket you will get a screening of the movie and also admittance to the After Party at the beautiful new restaurant Felina's on Ridgewood Avenue. You'll get the chance to mingle with Eric and the cast and crew from the movie, enjoy delicious appetizers and get selected drinks for $5.00, including two signature cocktails made just for the event. The After Party begins after the festival that night, approximately 10:30pm.

You can also pay $12 to see the movie alone with a general admission Film Festival ticket. Visit the website for Film Festival tickets, or pay day of. That ticket allows you to see other movies that evening. Please note that tickets are selling fast and there is no guarantee there will be availability day of the show. You can also just go to the After Party, the price is $20 at the door that evening.


Hollywould is a mystery/thriller about a popular writer that comes back to his hometown of Las Vegas  and meets a woman named Holly. The rest that ensues is something no one could have expected. Hollywould also Pete Postiglione, Caitlyn Fletcher, Torrei Hart and Ridgewood's RJ Konner.

Always check the website for updates and a full schedule. Use the hashtag #RGIFF to find information.


General Inquiries: Contact Tony Damiano at 201-493-9911
Tickets can be purchased online or
at the venues the day of the screenings:
https://www.brownpapertickets.com/event/4103157
Email ThisBlogThis!Share to TwitterShare to FacebookShare to Pinterest