VIEW: The New York City Skyline is Forever Changed with Hudson Yards - A First Day Impression of this City of Glass within a City

For anyone obsessed with architecture, New York City or the future it’s worth the trip to visit Hudson Yards.

Coming into NYC through the Lincoln Tunnel, I had seen the progress of these mirrored silhouettes over the last few years, though it was only in the last year really that these imposing skyscrapers were noticeable to the casual observer.

I had been reading articles about them, New York magazine had a great article on how they came to be. In a nutshell, the plan came to fruition during the Bloomberg administration. It is a 20 billion dollar complex with varying uses, retail, commercial residential and entertainment. Though the recreational aspects are for anyone, many of the shops and residences are intended for the high-end user.

There are several skyscrapers bursting though the clouds, the signature Vessel - a structure to climb in probably unlike anything you have seen before, and the Shed – a movable entertainment space which will house new and groundbreaking art and performances. I hear that 10% of all tickets will be heavily discounted for low-income residents.

Hudson Yards is the last large parcel of land to be developed in the Big Apple, and it sits atop a railyard. It's about 28 acres. There is a 7 feet concrete platform at its base. The 7 line runs there now.

I went to see it on opening day.  Here are some of my impressions. 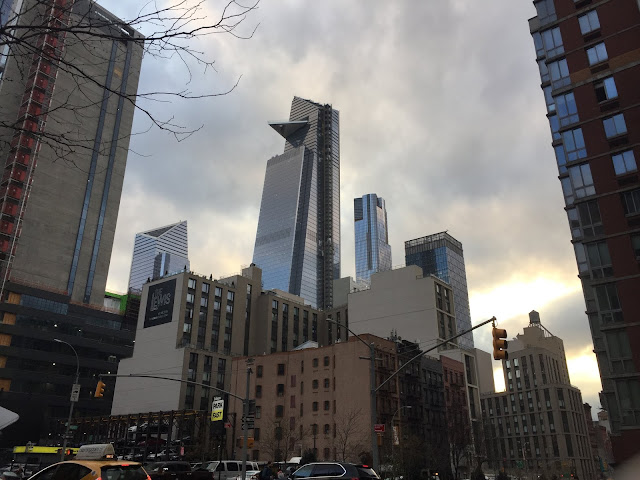 Skyscrapers Too High for Superman

The buildings are a sight to behold. You just look up, and up, and up and you look in the other direction and you do the same. The only thing is they kind of all look the same. But don’t get me wrong, these buildings are super cool. They have changed the skyline forever, especially from the Jersey side. That precipice is very Dubai-ish, though I doubt I will ever have the nerve to step on it.

I had a hard time finding food. I clocked a mile on my phone just going up to all the floors (and one escalator was not working) following signs that said Food Hall or restaurants. I found a few sit-down restaurants, but they were fancier than what I was looking for. If there was a “food court” like malls have I could not find it. I ended up eating at a French bakery- Bouchon- that had salads. I asked where I can eat it and they said ‘There is no seating but we will have another restaurant that will have seating.” I think I clocked another half mile looking for a place to sit and eat. I knew there was seating outside so if I didn’t see anything else on the way down, that would be my destination. I ended up eating sitting on the ledge of the hardscaping. No table.

So I was very excited about the green aspects that I had read about regarding these buildings. They generate their own electricity through solar, all the buildings are “smart”. Okay, so why then was I handed my $13 salad in a plastic bag? Also, why was the trash bin overflowing? And where were the recyclable bins? 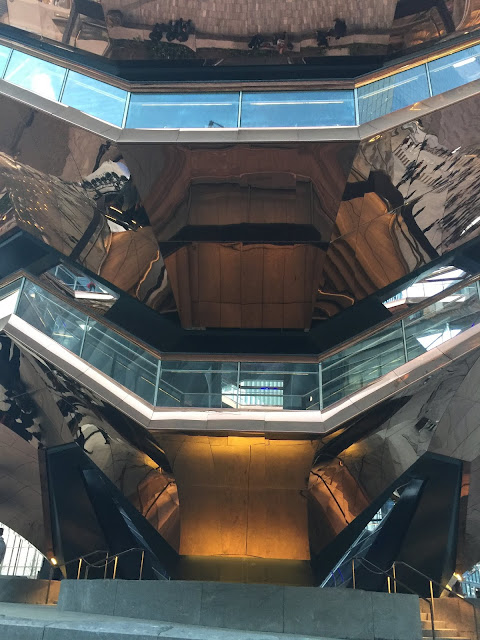 I had seen so many photos of this beforehand, that I knew what to expect. It was a very imposing, futuristic, shiny piece of art, a sight to behold. And the concept of just climbing stairs for the sake of climbing stairs is really appealing to me. It’s like hiking for city dwellers. What a great workout.

Even though it was opening day, it wasn’t too crowded so I asked several staff if I could get in. (There were plenty of people walking around and clearly marked so you knew who to talk to.) They wouldn’t even let me stick my head in to take a look. But, tickets are free. When I got there, about 5pm, there was just a little line to get in. All the staff was very helpful in explaining how to get tickets. They told me all the tickets for that day were sold out, in fact they were sold out for all of March. They said there would be more tickets would be online at 8am.

For tickets and info:
https://www.hudsonyardsnewyork.com/

I did not go into the Shell, the place that is slated to hold all kinds of fantastic, unusual and groundbreaking performances. I am not sure it was even open. I also did not to into any of the other buildings except for the one with the mall in it. I stayed there about two hours, put lots of steps on my health checker, looked at the view of Jersey, walked around the perimeter of the Vessel and went up to the fourth floor. I didn’t go all the way to the observation deck (not even sure it was available yet), well, because if a simple escalator was not working I was not taking my chances on an elevator to the stars. I watched the sunset and the sparkling buildings turn from reflecting sunshine to reflecting the night lights of the big city. It was a great first trip, and I will be back. 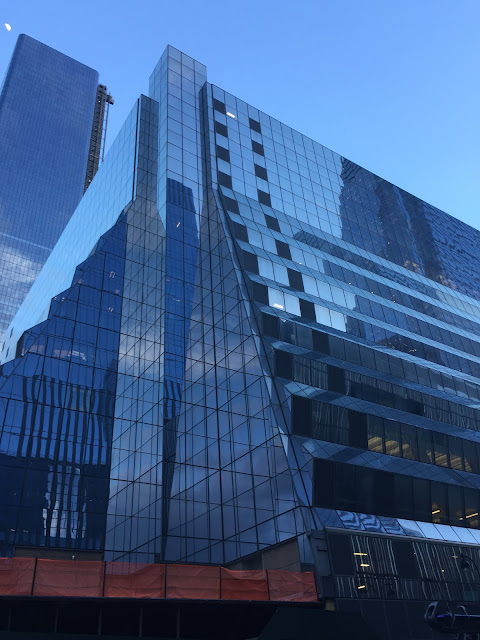 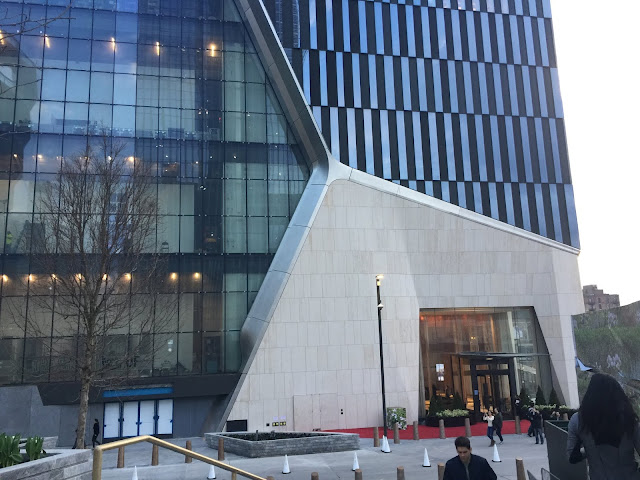 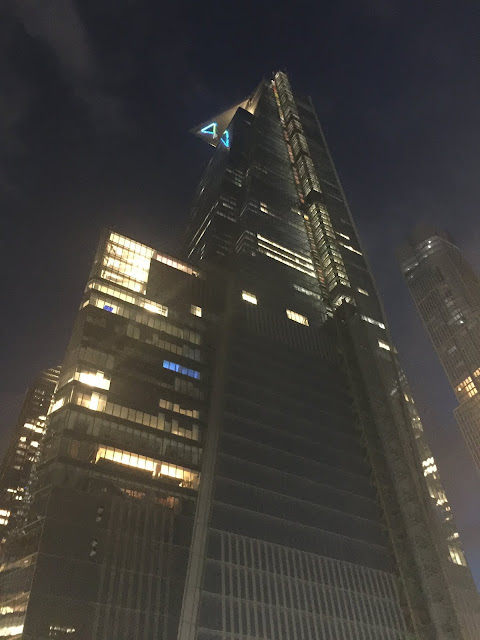