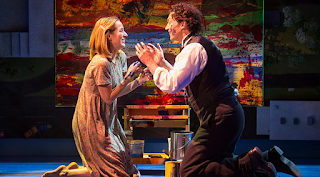 A look. A laugh. More looks. More laughs. And so it goes, without any dialogue, as the curtain goes up on Benny and Joon, making its East Coast premiere at Paper Mill Playhouse in Millburn, New Jersey. When the actors finally do speak their first lines it just gets funnier. Yup. This is a play about mental illness, about loss, about pain, about struggling to understand. And I am laughing along with everyone else in the theater. You see, this is also play about love, friendship, grilled cheese and a goldfish named Steven.


Bryce Pinkham in the role of Sam sets the tone right away for this quirky and surprising musical adaptation of the film of the same name. With Tony, Drama Desk and Grammy nominations to his credit, Pinkham delivers a brilliant performance as the childlike yet resourceful Sam. If you are not immediately drawn in by his mime-like facial expressions and mesmerizing illusions, I promise you will be wowed by his routine with dinner rolls and pas de deux with toast. That’s in addition to his skill with origami. (The story is set in 1992 when had to amuse ourselves with paper and other primitive household objects.) 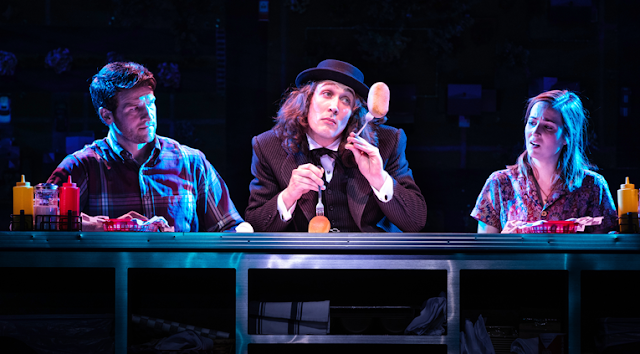 Sam comes to live with Joon and her brother Benny after she wins him in a poker game. Benny reluctantly agrees only because he needs someone to watch Joon while he is at work since she chased away the last sitter. Hannah Elless returns to Paper Mill as Joon, a young woman suffering from mental illness that often torments her but –we come to realize- doesn’t define her. Her frantic outbursts belie her artistic abilities, concern for others, and earnest advocacy for raisins (after all, they were once a grape). Elles’s Joon is whimsical, endearing and fresh. The same can be said of Pinkham’s Sam and Joon is soon enchanted by him.

Claybourne Elder, with credits ranging from Broadway to TV’s The Carrie Diaries, plays Benny who has taken on the responsibility of his sister despite his own pain after losing their parents in an accident. Elder shows us a complex Benny, struggling to keep their small family together and just as frightened as Joon. With the support of his friends and love interest Ruthie (Tatiana Wechsler, providing a big heart and big voice) Benny navigates the fragile line between his needs and his sister’s. Their codependency is at once what binds them and breaks them apart. 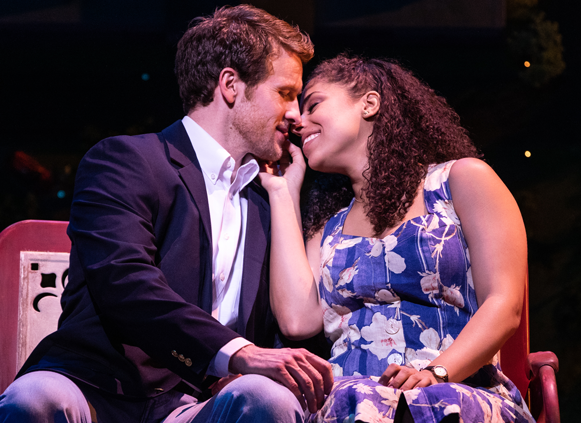 Paper Mill’s production of Benny and Joon is as much a powerful mix of hope, heartbreak and hilarity as it is a showcase for the cast’s powerful and rich voices as well as some rather unexpected talents. Without ado, Elless unfolds a lawn chair, plops down and treats us to a breezy and delightful ukulele solo. Pinkham roller skates with ease around the stage as he cleans the house. The cast at once dances effortlessly, plays baseball and even changes the scenery along a moving sidewalk cleverly built into the stage floor. Kudos to Choreographer Scott Rink and Director Jack Cummings  for treating the subject matter with warmth, humor and a touch of magic.

Yup, this is a play about mental illness- and you will love it. Now playing through May 5th.