The Ridgewood Guild International Film Festival is coming to Ridgewood and with it a bevy of local and international filmmakers and some Hollywood celebrities. Premiering at the festival is the Joshua Coats film Hollywould starring Eric Roberts and Ridgewood's own RJ Konner. Eric Roberts will grace the  Red Carpet on Thursday, April 25th at 6pm.

The 9 day festival officially begins on April 10th with a showing of the Oscar-winning movie Roma. Main nights at the Bow Tie Cinema are April 24th and 25th. The Red Carpet outside the theater is free, to get entry into all films for an entire night is $12 per day.
Other highlights this year include:

Out Fox the Holidays - This comedic short stars Andy Richter and is made by Bergen County's Emmy-winning director Glenn Clements of the Late Late Show with James Corden
Awakening Arlene -This short by returning filmmaker and former Ridgewood resident Brad Forenza stars Vince Pastore (The Sopranos).

A Case of Blue Trailer - The premiere of this film shot in Ridgewood made by many Ridgewood residents starring Stephen Schnetzer and Annapurna Srirum. It was written and directed by Ridgewood resident Dana Glazer. The Executive Producer is Scott Rosenfelt, the EP of Home Alone

The Perfect Murder-  A short by Vikkramm Chandirramani, award-winning director of Destiny.

TEEEM – Videos will show how local high school children are giving back and helping families in Africa and Peru. Viewers of this films will gain an understanding of how this organization helps children learn about families in third world countries and also how it activates them to help them.

There are over 100  films to watch by talented new and seasonsed filmmakers. There will be shorts, documentaries, music videos, digital shorts, trailers of new movies and animation. You can hop from theater to theater to see the ones you want. There is also ample opportunity to meet and talk to the filmmakers as well as the actors.

April 18 Foreign Film Night at the Ridgewood Public Library (A series of foreign shorts submitted to the festival). FREE ENTRY.

April 25 Closing Night at Bow Tie Cinema, Red Carpet at 6pm (Hollywould Film Premiere Night) Cost is $12 for the movies only or $30 which includes the movie & entry to the After-Party at Felina Restaurant. Note: The Awards & After-Party at Felina starts immediately after the film festival concludes. (approx. 10:30pm) Your chance to mingle with “Eric Roberts” the cast / crew and the other filmmakers. Tickets for After-Party alone at the door are $20 each.

"This is our 9th year hosting this festival in Ridgewood, " states Tony Damiano, President of the Guild. "Each year we offer something new and different to the viewer. We are very happy to have an Oscar-nominated actor gracing our Red Carpet this year." Dottie Fucito, RGIFF Chair states, "We had more submissions this year than every before. We have a great reputation in the filmmaking community and are happy to present the works of many northern NJ artists."

As each year, there will be a plethora of films to watch by talented new and seasonsed filmmakers. There will be shorts, documentaries, music videos, digital shorts, trailers of new movies and animation. You can hop from theater to theater to see the ones you want. There is also ample opportunity to meet and talk to the filmmakers as well as the actors. 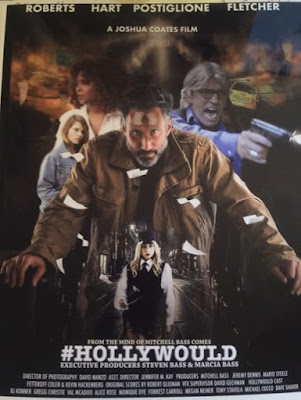 More on Hollywould
This year, Hollywood really does come to Ridgewood. The film Hollywould, which stars Eric Roberts, wil premiere at the festival. This Joshua Coates film is an action movie about a man who returns to his hometown and meets a woman named Holly.  It also stars Pete Postiglione, Caitlyn Fletcher, Torrei Hart and Ridgewood's RJ Konner. Cast and crew are slated to attend.

As of publication, the RGIFF would its Signature Sponsors which are Boiling Springs Bank, TEEM and P.G Guiren.

For more information:
Always check the website for updates and a full schedule. Use the hashtag #RGIFF to find information.


General Inquiries: Contact Tony Damiano at 201-493-9911
Tickets can be purchased online or
at the venues the day of the screenings:
https://www.brownpapertickets.com/event/4103157
Email ThisBlogThis!Share to TwitterShare to FacebookShare to Pinterest
Newer Post Older Post Home