Feel-Good Interview Series: Six Things to Know About John Brotherton of Fuller House and Hallmark Channel's "Lights, Camera, Christmas!" - What He Watches and What He'd Be Doing if He Wasn't Acting 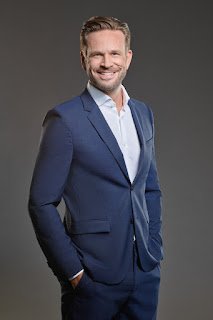 By Markos Papadatos, "Powerjournalist"
Hallmark actor and Fuller House star John Brotherton stars in the new Hallmark Christmas film "Lights, Camera, Christmas!" In this new original film, a holiday movie production comes to town in need of a costume designer, Kerry, a local shop owner, steps into the role and crosses paths with the film's charming star Brad.
Favorite series to binge
His favorite series to binge-watch is Dahmer -- Monster: The Jeffrey Dahmer Story, The Terminal List, Succession, and Yellowstone. "We just finished that. Dahmer was incredible and disturbing all at the same time," he said. "I can't wait for 'Yellowstone" to come back out, I love that show."
"Also, like everyone else, we have been watching the new Game of Thrones series House of the Dragon and that has been interesting. It has been a new journey that has made some interesting choices. I've loved the sets, the costumes, and the storylines," he added
John's Favorite film
His favorite movie lately is the new Top Gun: Maverick. "I can't get enough of it," he admitted. "It was just so good, it hit all the elements. I was even more impressed the second time that I watched it. I enjoyed sharing this experience with my family watching it at the theater."
Cheat meal
His favorite cheat meal is "ice cream" and "pizza." "I am a sucker for ice cream. That's my Number 1. I can go through a tub of ice cream," he said. "Like most people, I like pizza, it's awesome, as well as a bacon cheeseburger, and fries."
Alternate career choice
He revealed that his alternate career choice would be "engineering, design, and construction." "I love that world because I can't imagine myself in a cubicle in a traditional 9 to 5 job," he said.
John Brotherton's Superpower of choice
If he were to have any superpower, it would be "flight." "I would love to fly just to experience that, I would love to cruise around like Superman," he said.
Favorite motto to live by
His favorite motto to live by is: "Love the ones around you," "don't be afraid to be amazing," as well as "love, respect, and gratitude shall be my only attitude."
To learn more about actor John Brotherton, follow him on Instagram.
Photo Credit At Top: Brendan Meadows, Hallmark Media
Email ThisBlogThis!Share to TwitterShare to FacebookShare to Pinterest
Newer Post Older Post Home