Author and Emmy-Award Winning Actor from The Sopranos and The White Lotus Michael Imperioli On a Book Tour for His Debut Fiction Novel: The Perfume Burned His Eyes - See Him in NJ on December 11 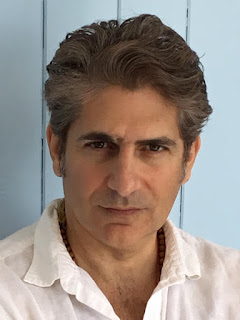 You've watched  him on The Sopranos and most recently got to see him in a different role on the hit HBO Max limited series The White Lotus - all the rage at the water cooler! Now, meet him IN PERSON at Bookends Bookstore in Ridgewood NJ, a short train ride out of New York City. He'll be there to sign copies of his book, The Perfume Burned His Eyes, a fascinating coming of age novel set in NYC. Bet you didn't know that that in additional to being an Emmy-award winning actor he is also a published author.  And he also wrote 5 episodes of The Sopranos. He will be at Bookends to sign a copy of his debut novel which just came out in paperback.
Usually when authors are at this bookstore, each purchaser gets to have their book personally signed and one of the friendly staff members will take a picture of you with the author.

The Perfume Burned His Eyes - such an intriguing title. Here's a description of the book:

Matthew is a sixteen-year-old boy living in Jackson Heights, Queens, in 1976. After he loses his two most important male role models, his father and grandfather, his mother uses her inheritance to uproot Matthew and herself to a posh apartment building in Manhattan. Although only three miles away from his boyhood home, “the city” is a completely new and strange world to Matthew.
Matthew soon befriends (and becomes a factotum of sorts to) Lou Reed, who lives with his transgender girlfriend Rachel in the same building. The artistic-shamanic rocker eventually becomes an unorthodox father figure to Matthew, who finds himself head over heels for the mysterious Veronica, a wise-beyond-her-years girl he meets at his new school.
The novel is written from the point of view of Matthew at age eighteen, two years after the story begins, and concludes with an epilogue in the year 2013, three days after Lou Reed’s death, with Matthew in his fifties.
Ironically, Michael Imperioli will be at Bookends  the day the much -anticipated finale of the second season of THE WHITE LOTUS drops. Will he be the one to meet his demise? My guess is no!