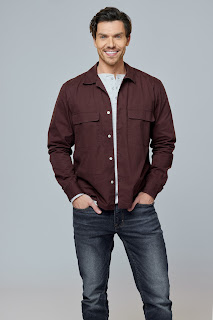 By Markos Papadatos, "PowerJournalist"
Actor George Krissa chatted about his new movie The Holiday Sitter, which premiered on Hallmark December 2022, as part of Countdown to Christmas. He stars opposite Jonathan Bennett. This marks the first time that a Hallmark holiday flick revolves around a same-sex couple.
In The Holiday Sitter, Sam (played by Jonathan Bennett) is a workaholic bachelor who babysits his niece and nephew before the holidays when his sister and her husband have to go out of town. Completely out of his element, he recruits help from their handsome neighbor Jason (George Krissa) and finds himself in an unexpected romance.
What George Krissa Watches
His favorite movies include Mean Girls, Scream, Office Space, and Bridesmaids.
Krissa's favorite series to binge-watch are 30 Rock, The Office, and Drag Race.
His Cheat Meal
He revealed that his favorite cheat meal is chips. "I can eat chips for the rest of my life and be happy," he said. "I also like nachos, pizza, wings, and junk food. I'm a junk food junkie," he admitted.
How He Feels About This Chapter of His Life
On the title of the current chapter of his life, he said, "30s are a Roller Coaster."
His favorite motto to live by is "never underestimate the power of I decide it." "I decided I was going to do it, so I did it," he explained.
If He Lived in an Alternate Reality....
If he weren't in acting and entertainment, he would like to scuba dive in the coral reefs.
When asked what superpower he would like to have, if afforded the opportunity, he responded, "I would be a Harry Potter-style wizard where I would do magic or I would fly."
For More on The Holiday Sitter visit:
https://www.hallmarkchannel.com/the-holiday-sitter
Photo Credit: Sven Boecker, Hallmark Media
Email ThisBlogThis!Share to TwitterShare to FacebookShare to Pinterest
Newer Post Older Post Home