Feel-Good Interview- Actor Jillian Murray of Great American Family's "A Brush With Christmas" Talks about What She Watches, How She Unwinds and the Defining Moments in Her Career and Life 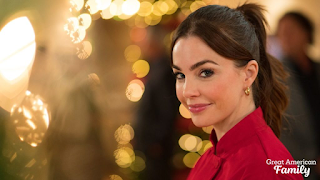 Actress Jillian Murray stars in the new holiday movie A Brush with Christmas opposite Joseph Cannata, which premiered this season on Great American Family.

She previously starred opposite Trevor Donovan in Prescription for Love, and she will star opposite Robert Palmer Watkins ("General Hospital") in the Netflix film "Uglies."
What Jillian Murray Watches
Her favorite Christmas movies include "Four Christmases (with Vince Vaughn) and National Lampoon's Christmas Vacation. "They are both brilliant movies," she admitted.
Murray's favorite series to binge-watch are reality shows such as Too Hot To Handle and Fleishman Is in Trouble, which is on Hulu and it stars Jesse Eisenberg and Lizzy Caplan. "They are so so good, Fleishman feels like a novel," she said.
How She Unwinds
In an effort to unwind and relax, Murray enjoys "spending as much time as possible in nature and with animals." "I am a huge animal person," she said. "We released a few squirrels in our yard about six months ago, we have about seven squirrels, and they are a part of our family now."
She revealed that her favorite cheat meal is "chocolate chip cookies." "It's Christmastime so we are allowed to have cookies," she said.
Her Motto and Advice
On her favorite mottos to live by, she said, "Don't have a Plan B because you will forget about your Plan A."
For young and aspiring actors, Murray said, "Do it because you like telling stories and you like collaborative experiences. Don't it for money, fame, or ego."
A career defining moment was when she did Never Back Down 2 because that is where she met her husband, Dean Geyer. "Also, being cast on a series called 'Code Black' was life-changing because it changed the trajectory of doing procedural for a while," she said.
Email ThisBlogThis!Share to TwitterShare to FacebookShare to Pinterest
Newer Post Older Post Home