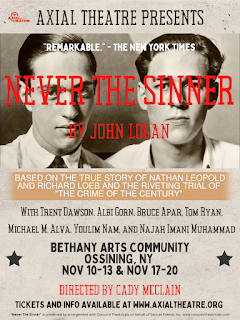 Axial Theatre, under Artistic Director Cady McClain, is proud to announce the fall production of Never the Sinner by John Logan, featuring Broadway actor Trent Dawson, Tuesdays With Morrie star Albi Gorn, Michael Howard Conservatory Members Tom Ryan and Michael M. Alva, and Axial Theater Members Bruce Apar, Youlim Nam and special guest Najah Imani Muhammad.  The play will be produced at Bethany Arts Community in Ossining (N.Y.), Nov. 10 - 13 and Nov. 17 - 20, 2022. Thursday through Saturday shows are 8 p.m. Sunday performances are 3 p.m.  A post-show discussion of the topics of the play will follow each performance, led by director McClain, members of the ensemble and special guests. Tickets are $10 students,  $25 general seating, available at axialtheatre.org
McClain will be directing and producing alongside Axial Board Members Steven Williford (Emmy© Winning Director), Amanda Quinn Olivar (Editor-in-Chief, Curator.Guide), and Axial Ensemble member Dan Walworth.
UPDATE: Pat McGuiness, who is an Axial Ensemble member will be replacing Trent Dawson in the role of Robert Crowe.
Never the Sinner is based on the true story of two young men, Nathan Leopold (Tom Ryan) and Richard Loeb (Michael M. Alva), who murder a local boy to prove their superiority and claim the right to having committed “the crime of the century.”  The case is argued by two esteemed lawyers, Clarence Darrow (Albi Gorn) and Robert Crowe (Trent Dawson).  While Crowe wants to fulfill the outraged nation’s cry for a hanging, Darrow argues for the rights of all human beings to be shown mercy, no matter how shocking the crime.

Covid protocols will be in place per CDC and Actors Equity Association (AEA) guidelines that are posted at the time of the production. 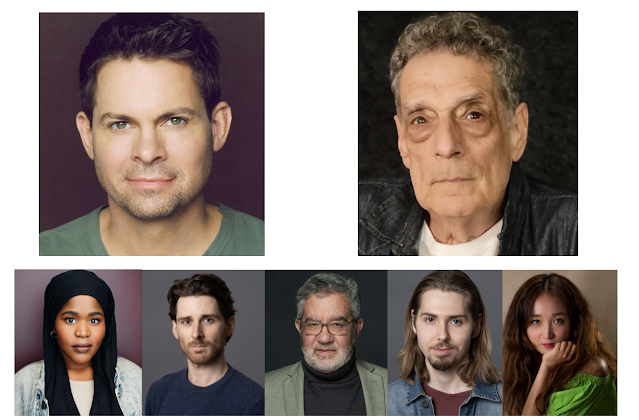 ABOUT TRENT DAWSON (as “Robert Crowe”)

ABOUT ALBI GORN (as “Clarence Darrow”)

Albi Gorn has been acting for fifty years. He last acted with Axial as Dr. Rank in A Doll’s House. A former Ensemble member, he also has had several of his plays produced at Axial, including the Westchester premiere of Back to the Garden.  Among the plays he has acted in: Tuesdays With Morrie, A Man For All Seasons, Talk Radio, You’re a Good Man, Charlie Brown, The H.M.S. Pinafore, Oleanna, Speed-the-Plow, Dry Powder, The Cooking Lesson (written by his wife, Robin Anne Joseph) and his favorite role, that of Herman in his own one-act, It’s About Forgiveness. He and Robin run GoJo Clan Productions, a nomadic theater company in Westchester (gojoclanproductions.com). You can read his plays and listen to his songs at albigorn.com. 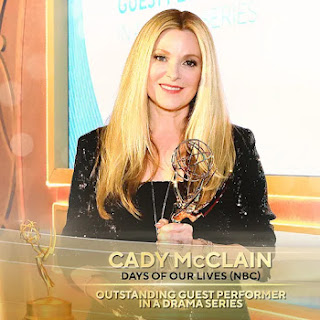 Cady McClain is proud to be Axial Theatre’s new Artistic Director. In 2021 she was recognized by Deadline for being a history-making three-time Emmy© winner, acting as three unique characters on three different daytime shows. Cady studied theater directing with legendary artistic director of Ensemble Studio Theater, Curt Dempster, and studied acting for eight years with Michael Howard. Her theatrical directorial debut was with Axial Theatre in Paint Made Flesh by Axial Founder Howard Meyer, shown at The Cell in NYC. Her film documentary on female directors, Seeing is Believing:Women Direct, won multiple awards, including the Audience Award at the SOHO Film Festival and a Jury Prize at the Newport Beach Film Festival. It was released on regional PBS stations nationwide and the educational platform Kanopy. She currently plays “Jennifer” on Days of Our Lives. cadymcclain.com

Axial Theater is a 23-year-old not-for-profit institution founded by Howard Meyer. It is dedicated to supporting the professional development of the independent voice through audience involvement and is commited to presenting challenging and relevant theatrical experiences. The company and its productions have been reviewed in The New York Times and are supported by the William T Morris Foundation and ArtsWestchester among others. axialtheatre.org