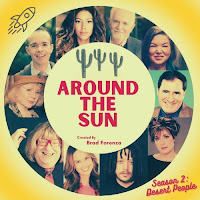 Around the Sun, the popular podcast series starring iconic and well-known actors from stage and screen will drop its second season starting on October 26, 2022 with new episodes dropping until early 2023. Hear the voices of some of your favorite actor from past and present bring to life a series of short stories that will engage you, make you think and make you want to hear more. This season features Richard Kind (The Watcher), Caroline Aaron (The Marvelous Mrs. Maisel,  Adassa ( Encanto), Mindy Cohn (The Facts of Life),Richard Kline (Three’s Company) Jennie Kwan (California Dreams, Piper Laurie (The Hustler), Taylor Purdee (Killian and the Comeback Kids) and Bruce Vilanch (Get Bruce).

Created by Brad Forenza and presented via the Broadway Podcast Network, this new season follows the success of the first series of short audio dramas (averaging 10 minutes each) that tell a different story. Together, they all tie in. The stories are engaging, interesting, different, insightful, humorous, inspiring and just fun to listen to as each actor's voice is a joy to hear.

This season's theme is about the desert - things that happen or are inspired by a desert landscape. And you'll be surprised to hear so many different types of stories. You'll hear stories about love, relationships, unrequited love, coming of age, identity, retirement, life choices, sustainability, and even a few aliens. You can find it here and just about wherever you stream podcasts. It's the perfect series to listen to in the car, on a walk, in the gym or just to escape for a few minutes.

In addition, series creator Brad Forenza, reprises his role as narrator and showrunner. Suzanne Ordas Curry (Equity, A Case of Blue) serves as Co-producer. Shane Curry Productions (Libby Jade Band) did the opening theme and sound editing.
Richard Kind states, "I had such a fun time recording this. The writing is so good, and the characters so clearly drawn,” added Kind. “I only recorded two scenes that bookend the entire story. But I’m so looking forward to hearing what comes in between. Especially with this fantastic cast."
Adassa adds, “Working with Brad Forenza was such a fun experience. His vision and unique point of view on this project was igniting on so many levels. In Around the Sun, I was able to engage in a real life situation with all the enthusiasm and drama that plagues so many of us on a daily basis.”
Creator Brad Forenza states, “Around the Sun is a true labor of love, and I am so glad that it is one, among many, creations to survive the pandemic. The revived audio drama medium empowers us to present these intimate dramas to a much wider audience, with a truly talented and generous cast."
Around the Sun is a scripted, episodic audio drama that explores human connections, made and missed, with an existential flare. Whether consumed together or independently, the comedy, tragedy, and soul of Around the Sun embraces one character’s assertion that we as humans are never alone… even if it feels like the opposite is often true.

Following is more about this season's cast: 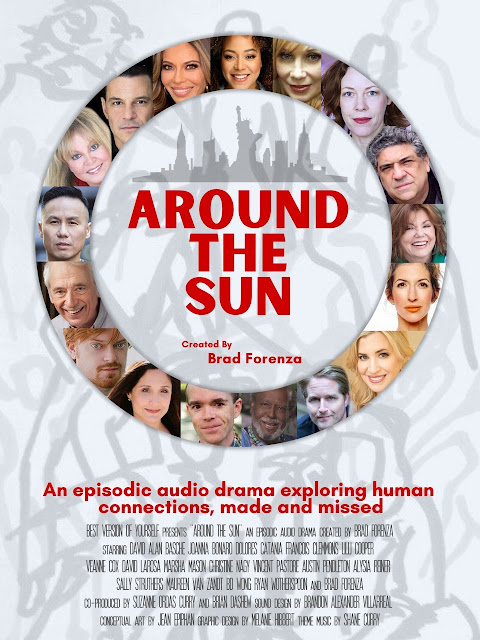 Check out Season One:
Season 1 of Around the Sun was produced during earlier days of the pandemic. The entire season is available for streaming “wherever you listen to podcasts,” and also features an array of popular talent:
David Alan Basche (The Exes)
Joanna Bonaro (Good ‘n Screwed)
Dolores Catania (Real Housewives of New Jersey)
François Clemmons (Mr. Rogers’ Neighborhood
Lilli Cooper (Spring Awakening)
Veanne Cox (Rogers and Hammerstein’s Cinderella)
David LaRosa (Clandestine)
Marsha Mason (The Goodbye Girl)
Christine Nagy (106.7 Lite FM)
Vincent Pastore (The Sopranos)
Austin Pendleton (My Cousin Vinny)
Alysia Reiner (Orange is the New Black)
Sally Struthers (All in the Family)
Maureen Van Zandt (The Sopranos)
BD Wong (Jurassic Park)
Ryan Wotherspoon (Fogg)
Brad Forenza (A Case of Blue)… all playing New Yorkers, yearning to connect.
Season 2 of Around the Sun launches on October 29th, 2022, stream it “wherever you listen to podcasts.
Here are the episodes available as of posting this article:

The series is a Best Version of Yourself production, created by Brad Forenza, co-produced by Suzanne Ordas Curry, and presented via the Broadway Podcast Network. Continue the conversation via #AroundTheSunPodcast, or via the show’s creator (fb: @BVOYLLC; IG @BradForenza; Twitter: @BradForenza).
Learn more at aroundthesunpodcast.com.
# # #
Email ThisBlogThis!Share to TwitterShare to FacebookShare to Pinterest
Newer Post Older Post Home