Event: I Put A Spell On You: ALIVE at Sony Hall and on Broadway on Demand October 23, 2022 Filled with Broadway Stars to Benefit Broadway Cares/Equity Fights Aids 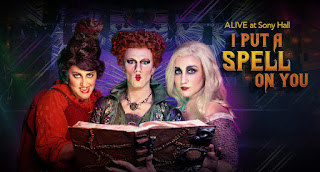 Now you can dress up and get spooky for Broadway’s biggest Halloween event of the year both live at Sony Hall and in the comfort of your own home! Jay Armstrong Johnson’s annual Halloween concert-meets-party I Put a Spell on You will stream on Broadway On Demand beginning at 7 pm Eastern on Sunday, October 30, 2022 and be available for the following four days. The event will be recorded LIVE at New York City’s Sony Hall (235 W 46th St, New York, NY 10036) on Sunday, October 23, 2022.
The live event and on-demand stream benefit Broadway Cares/Equity Fights AIDS.
All streaming and live tickets start at $35 and are on sale now at broadwaycares.org/spell.

”Partnering with Broadway On Demand is a great way for the fans that we have amassed over the past two years of our virtual album to still be able to join us in the celebration,” Johnson said.  “They have supported us and Broadway Cares/Equity Fights AIDS with such enthusiasm, we wanted to show them our appreciation.”

I Put a Spell on You was created by and stars Johnson (ABC’s Quantico, On the Town, The Phantom of the Opera). The annual show is a spoof of and tribute to the beloved cult classic movie Hocus Pocus. Expect larger-than-life performances and choreography, over-the-top costumes and makeup, unmatched production value and a healthy dose of Broadway magic.

In their search to find beauty, youth and immortality, the bewitching and beloved Sanderson Sisters return from the dead and gather their most famous friends to help them lure the children of New York. The show begins at 8 pm Eastern (doors open at 7:00 pm) and begins with pre-show escapades and ends with a blowout dance party DJ’d by VELEZ&PARADA. Embrace the evening by joining us in your favorite Halloween garb and enter our costume contest to win prizes.

About Broadway on Demand

“We are honored to be the official streaming platform for I Put a Spell on You,” said Sean Cercone, president and CEO of Broadway Licensing, the parent company of Broadway On Demand. “Given the vital support provided by Broadway Cares, with its fundraising and grant-making contributions across the nation, we feel that Broadway On Demand is the perfect partner to provide online viewing access to this marquee event for theater fans  across all 50 states.”

Broadway On Demand is the industry-leading streaming platform housing performance & theater education programming, and the preferred choice  of top Broadway artists, producers, educators, and professionals. Broadway On Demand has streamed over 2,500 events and live productions—from Broadway shows to concert series, performance venues to individual artists, and original content—in 114 countries to 300,000+ subscribers and was honored with an Emmy Award® nomination in 2021. Thanks to a unique licensing interface, Showshare, approved middle school, high school, college, community, and professional theater productions utilize the platform to stream to their audiences.

I Put a Spell on You: ALIVE at Sony Hall is presented by Kampfire Films and Jay Armstrong Johnson and benefits Broadway Cares/Equity Fights AIDS.

Every ticket purchased will help those across the country affected by HIV/AIDS, COVID-19 and other critical illnesses receive healthy meals, lifesaving medication, emergency financial assistance, housing, counseling and more.

Sponsorship and VIP packages are available. Visit broadwaycares.org/spell for information.

All attendees must be fully vaccinated against COVID-19 and masks are strongly recommended (it is Halloween, after all!).

Broadway Cares/Equity Fights AIDS, the philanthropic heart of Broadway, is one of the nation’s leading industry-based, nonprofit AIDS fundraising and grant-making organizations. By drawing upon the talents, resources, and generosity of the American theater community, since 1988 Broadway Cares/Equity Fights AIDS has raised more than $300 million for essential services for people with HIV/AIDS, COVID-19 and other critical illnesses across the United States.